In a single sentence Don Lemon demonstrates all of the idiocy, lies, racism and bigotry of modern America 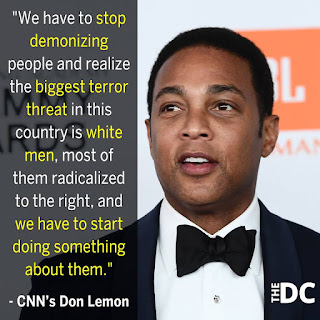 Yep.  You read that right.  He actually said that.  In addition to the gross lack of self awareness, it demonstrates the new official bigotry of the United States.  The Left has turned white, Christian men into the Jews of 1930s Germany, or Blacks of the Jim Crow South.  And it does so as easily as those groups were demonized, because the ones in power believe it, just as they did back then.

When you see this, you realize that if Mr. Lemon was white and living in the 1800s in Alabama, he would likely have the same attitude about Blacks.  It's racism and bigotry and it's evil.  Sadly, like all ages, you will have plenty in power who will embrace it because, well, that's what all the cool people are doing.

And, as always, you will have plenty of people ready to hang up their worship of Jim Crow for the next substitute for Jesus if it will ensure suffering for the Gospel on six figures a year.
Posted by David Griffey at 9:25 PM

Email ThisBlogThis!Share to TwitterShare to FacebookShare to Pinterest
Labels: Hypocrisy, Stupid is as Stupid is, the Joy of Racism on the Left