There is still some hammering away at the details, but the Patheos channel for my blog is now up and running.  Here is the link.  Moving forward, I'll be posting there.  At first, until I get used to things, the posting might be a bit sparse.  But once I'm comfortable with the new systems, I should be back to full steam.  See you over there!  Remember, tell a friend.  :)
Posted by David Griffey at 7:00 AM 4 comments:

Email ThisBlogThis!Share to TwitterShare to FacebookShare to Pinterest
Labels: Blogging 101

This time in Saudi Arabia.  Four were killed.  Several injured.  Thank God it wasn't as horrible as the last several attacks.  God grant peace to the families of the victims, and pray for the souls of those lost and those who are so warped by the evil ideologies which drive them to murder and suicide.  Pray for strength, not only for those directly impacted by this evil, but also the strength of our leaders to admit when they are wrong and the courage to call evil by the name of its most recent manifestation.  Only through honesty can we overcome such evil.  When we take the first steps in deliberate denial of truth, the rest of the journey will be a crooked one at best.
Posted by David Griffey at 7:07 PM No comments:

Pray for these precious lives lost to murder.  Pray for the soul of the mother who murdered them.  Pray for strength and peace for the remaining loved ones who will carry this with them for the rest of their lives.  And pray for a society that doesn't seem to care, because I saw it on a news ticker and found the story on a local news outlet.  May God have mercy on our souls.
Posted by David Griffey at 11:32 AM No comments:

Some De-Stalinization for Independence Day

One thing about our post modern revolution, it makes no bones about its desire for a post-freedom society.  It seems happy to admit it wants government censorship, government control, and the ability to eradicate all traces of ideas and beliefs it finds repugnant.  And it's willing to use the same tactics liberalism long condemned as evidence of totalitarian terror states.

So in this story, a Pennsylvania lawmaker has joined the anti-history movement of the modern Left.  I get why folks wouldn't want a Confederate Flag flying at a courthouse or statehouse.  After all, why bother?  We don't have Union Jacks flying at government buildings.  England lost.  So did the Confederacy.  And yes, the issue of slavery was the catalyst for the greater issue of America's identity and political structure.  I understand the symbolic implications.

Nonetheless, history is to be learned, not changed to conform to our whims and fancies. We don't erase history.  We don't take old photographs and edit out offensive people or ideas or symbols.  That's what the Communists did.  That was Joseph Stalin 101.  Those who think it will end with the Confederate Flag represent a new, historically unprecedented level of stupid or at least naivete.

Yet on cue, we have another of a growing number of examples of the modern Leftist revolution's desire to rewrite reality to conform to its dogmas.  The insistence that historical reenactors remove the Confederate flag because, for some reason, they say they don't tell history?  Let me tell you a little bit about historical reenactors.  At least regarding their particular spot of history, there are few professional PhD historians who know more about the history than they do.  This is their passion, their love, and they spend more hours studying and investigating their part of history than most scholars you'll ever meet.  To say they don't do it accurately is modern newspeak for meaning they present history based on facts, not on the all important narrative.

Nonetheless, as is becoming increasingly clear, those with facts, reason and common sense on their side are fighting a losing battle.  Somewhere America crossed a line or went around a corner.  We no longer want truth.  We don't want facts.  We don't want reason or reality.  We simply want whatever we want.  And facts are becoming a pain in the butt.

It's not a conservative or liberal thing per se.  I've seen many conservatives argue against the obvious, especially when it came to torture or wire tapping.  But the driving force of this trend is the radical Left and its revolutionary takeover of America's heart and mind.  Like the communist revolutions before it, facts and reason cannot be tolerated.  And like the communists before it, censorship and the eradication of evidence that flies in the face of its propaganda are name of the game.

As we celebrate Independence Day, I must begrudgingly side with several sites and posts that have lamented the failure of the great American experiment.  It took over two centuries to fail, but for all their wisdom and foresight, the Founding Fathers never saw the radical secularist revolutions of the 20th century that would finally do it in.  Even if, of course, they foresaw the tendency of the masses to support slavery over freedom at the first chance.  They merely assumed education and a free press were balances to keep men free.  Apparently they didn't see the press and educational systems allying to teach people to end the checks and balances that keep them free so that they could return to the servitude from whence their ancestors came.
Posted by David Griffey at 6:00 AM 2 comments:

Email ThisBlogThis!Share to TwitterShare to FacebookShare to Pinterest
Labels: Censorship for the Stupid, End of Liberty, The Leftist Juggernaut 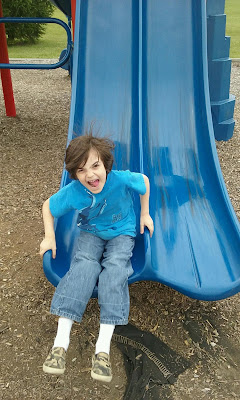 Posted by David Griffey at 2:00 PM No comments:

Email ThisBlogThis!Share to TwitterShare to FacebookShare to Pinterest
Labels: Important things, the Boys

Pray for the victims in Iraq

Apparently over 80 people were killed in bombings in Iraq.  Almost 200 wounded.  Pray for the victims and their loved ones.  Pray for peace and strength.  And pray for the evil of that region of the world. Pray that hearts be turned and that conversions take place.  If we believe that only through Christ can true peace emerge, then pray for conversion to Christ so that true peace can emerge.
Posted by David Griffey at 9:00 AM No comments:

I'll be out for the rest of the weekend.  I have no clue when everything will going strong at Patheos.  In the meantime, check at Patheos or check back here.  For fun, I had the day off and decided to comment on a very open and reasonable Catholic Facebook page.  The topic was lifting up above the political media partisanship and narratives and trying to look at society as a whole.  It's fun reading, let me tell you.  Until next time, be safe, have a wonderful weekend, and God bless.

UPDATE: Apparently Mark has banned me from his Facebook page for good. We'll see if there is more to say about that later.  For now, the link might not work.  Which is fine.  It wasn't pleasant reading.  Anyway Happy July 4th.

UPDATE 2: Mark has now banned me from everything at this point.  My wife too.  Towards the end of the Facebook debate, Mark called upon his readers to join him.  No, he didn't say he wanted them to join and gang up on me.  But I was pretty sure that was where he was going.  During the course of the development, his readers made it clear that they supported Mark's approach to discourse over mine.  They were also aghast that I would post a link to his page and beg my readers to go over there.  Personally I wouldn't have minded if a few readers came over and helped me out against the onslaught.

Now Mark has done that very thing more times than I can count.  I was shocked to find out it was a big deal.  Heck, back in the day I would follow links Mark posted about debates he was in on other sites and rush to defend him when he was being attacked.  I imagined that it was fine to do.  But Mark clearly had issues with it, and Mark is an honourable man.

Likewise, Mark made it clear he was outraged at the posts where I have criticized him, his styles, or that part of the Catholic blogosphere with which he associates.  Usually, those posts came after heated debates with Mark in which Mark either said something about others I felt crossed the line, or said something about me which I thought crossed the line, and either threatened to ban me or ordered me off of his page.  I don't know about you, but I don't like being accused of wanting to increase human slaughter or not really caring about Jesus.  Especially when, in the course of debating, I'm forbidden from defending myself under threat of being banned.

Nonetheless, despite the fact that Mark has made his living by posting the writings and statements of others and criticizing them and calling on his readers to do the same, he was upset at the fact that I had done the same to him.  I didn't see it as some hate thing, I'm sincerely worried about Mark's spiritual pilgrimage.  Yet Mark was offended.  And Mark is an honourable man.

So from now on, if Mark stops taking the words of others and using them to attack those individuals or encouraging others to do the same, then I will refrain from further posts or criticisms of Mark or his tactics.  Quite frankly, if Mark stops doing that, I'll have little to complain about.  When Mark actually writes about Church teaching or unpacking the Bible or day to day Christian living, there are few better.  What could I complain about?  So that is my pledge.  I will no longer criticize Mark or post references to him, unless it is to give a thumbs up regarding something he has written, if Mark also ceases the same approach that he criticized me of using.  After all, if he does that, then I could honestly say that Mark is an honorable man.
Posted by David Griffey at 8:00 AM 2 comments:

Pray for the victims in Bangladesh

Horrible.  I realize that more people die in car crashes and lightning strikes and racist police and all that.  But this is different, and should be different.  This type of attack should united people to make it stop.   In the meantime, 20 dead, killed by Islamic terrorists.  Pray for them and their loved ones, that God bring an almost unbelievable peace to them at this time, and give them the strength and courage to face the months and years to come.  And pray that God give us survivors wisdom, that we find a way in keeping with our Faith walk to bring an end to this blight of evil, that others do not have to suffer this same terrible fate.
Posted by David Griffey at 5:49 PM No comments: