From before you could be punished for saying boys and girls

This old post, in which my then teenage boys realized that PC was really a euphemism for tyranny and an eradication of freedom and liberty, life and religion.  That was in 2014.  Now look at it.   An all out assault on the Christian Western tradition and a rise of bigotry, prejudice, hate and intolerance for any non-secular leftist view that makes Berchtesgaden seem a paradise of free thinking tolerance by comparison.  And in only six years.  Indeed, what will it look like in six more years?

If you want an outsider's view, this is a fine blog of a former professor from Russia who, like so many born outside the Western Narrative Bubble, sees the writing on the wall.  And what they see ain't pretty.  In fact, as a Romanian immigrant (also a professor) I know quipped, we're already 1/3 Soviet but don't know it.  So many from that part of the world recognize the same thing that we either are missing, or simply aren't prepared to do anything about.

Email ThisBlogThis!Share to TwitterShare to FacebookShare to Pinterest
Labels: Decline of the Christian West, End of Liberty, The Tyranny of the Left

Yes STDs are at all time highs

In addition to the continued HIV/AIDS infection and death rates, the near epidemic overdose rates, and of course the necessary abortion culture as final anti-pregnancy safety net, the spike in STDs reminds us that the glorious Sexual Revolution continues to harvest its body count.

None of this includes the various other burdens that have fallen on people and society as a result.  The ramifications, the logical conclusions; the emotional, psychological strain, the broken families, fatherless children, it all takes a grotesquely monstrous toll.

It's likely no coincidence that suicides among teens are at all time highs, and for the first time ever since we've documented such phenomena, suicide is the second leading cause of death amount ten year old children. Add to this the now all too common mass shooting, mass killing, school shooting and other forms of random violence that were not common occurrences fifty years ago, and it's safe to say we've screwed up big.

Of course we also live in an almost unprecedented age of selfishness, arrogance, narcissism, nihilism and apathy.  If it only impacts others, we're good.  Thirty six million dead worldwide from AIDS?  That's the sacrifice we're willing to lay on the altar of our libidos.  Millions dead and millions more ruined from recreational drugs?  You can't have the sex culture without the drug culture.  Again, proxy martyrdom: by the degree to which we'll tolerate the suffering of endless millions of others have we declared our righteousness.

I like what one of my sons said.  He said it if was any other generation than ours, much of the pontificating they hear would sound almost honorable and respectable.  But it's our generation.  And given the deplorable track record, it's more likely that we're hearing a lot of hot air meant to cover our reluctance to fix the problems we've been so willing to let pile onto the backs of our posterity.

As a special bonus, here is a couple of stories about the glorious Pill (that is, birth control pill).  One from way back in the 70s,  No need to worry.  As you can tell, a 'don't be hasty, we're willing to wait this one out' mentality is there.  I remember when our goto cold medicine, Vicks Formula 44D, was pulled from shelves overnight because studies suggested it could possibly increase the likelihood of health problems (Stroke, IIRC).  No wait and see, no let's not be hasty.  The story broke, the next day the shelves were empty.

Consider this.  Two cases have just come out where women have suffered stroke or died in connection to the pill.  Each story admits the possibility of problems, but note the emphasis: don't worry, by happy - and keep taking those pills!  Again, we have said there is no end to the tens of millions of people, including children and the unborn, we won't let die rather than backtrack on the sex, drugs and rock and roll era.  Shame on us.
Posted by David Griffey at 6:00 AM No comments:

Email ThisBlogThis!Share to TwitterShare to FacebookShare to Pinterest
Labels: Evil, The death toll of our sex obsessed society

Henry Kaiser was an American shipbuilder who jumped on the war effort in World War II.  He was able to turn out ships called 'Liberty Ships', among others, at ungodly rates, helping boost America's logistical war effort.  He became a symbol of America's industry and hard work, the staggering levels of which helped overwhelm the Axis powers. In later years, he and others of his ilk became a symbol of the growing perspective that WWII was a giant military industrial complex conspiracy to build weapons for profit while encouraging war and destruction because that's where the money was.

Anyway, that came to my mind recently.  And here's why. So there's a commercial I've seen.  It features a speech by FDR, and B&W film of student and youth protesters stumping over Climate Change/Global Warming/Climate Disruption.  I saw it a couple times on the monitors at the YMCA, and paid only scant attention.  Then I decided to watch it through and see what it was about.

It then dawned on me what a boon for new eco-friendly industries this Global Warming hysteria happens to be.  I mean, you've got the scientists, scholars and leaders of the world insisting we're all going to die and the world will explode if we don't go green and radical to stop Global Warming and voila!  Here are these companies selling just the products we need to save the world.

Now I've said I believe STEM causes Global Warming.  That is, the overemphasis on STEM since industrialization has no doubt had many negative side effects that have hurt various things including, but not limited to, the environment.  But I also can't deny that Global Warming is a molehill of science upon which a mountain range of agendas, politics, and other ulterior motives has been piled.   It just breaks the bounds of credulity to believe otherwise.  It would be the first time in history if it wasn't the case.

As the commercial in question shows, lots of money is available since, per everyone, if we don't take radical measures (that will likely hurt everyone else, especially pesky blue collar and lower income types), the world will blow up and we'll instantly die.  Like those who spread hysterics about Reagan nuking the world in 1980, the hysterics are there again.  Only this time, it's not just political.  Many agendas are clearly at work.  And companies and industries dedicated to clean energy and other eco-friendly products have at their disposal a marketing windfall that Henry Kaiser only dreamed of.  For Kaiser only had America and its war effort to help him out.  Eco-corporations have the whole world of elites and leaders to help them sell the sizzle of inevitable doom to an entire up and coming generation that believes it like gospel truth.
Posted by David Griffey at 6:00 AM No comments:

Email ThisBlogThis!Share to TwitterShare to FacebookShare to Pinterest
Labels: Global Warming, The Power of Propaganda 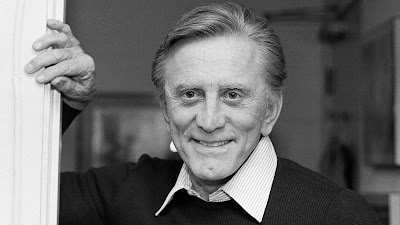 I just learned that Kirk Douglas has died.  Donald McClarey has a fine tribute here.

I grew up hearing about him because he was a favorite of both my Mom and Dad.  They were not big fans of many of his contemporaries or those from the Golden Age; them not liking Bogart, John Wayne, or Edward G. Robinson to name a few.  But they liked Douglas, and I think it's fair to say he was one of their favorite actors.

As a result, and as a result of the movies that made their way onto the television when I was growing up, I got to know several of the films that made him famous.  Top of these was, of course, the epic Spartacus.  I also saw him in war movies, such as In Harm's Way, as well as later fare like The Final Countdown.  I also remember seeing him in a strange movie called There Was a Crooked Man, and realizing he was the same fellow from Disney's 20,000 Leagues Under the Sea.

But I must say he was one whose presence far exceeded the films I saw.  He had quite a large resume, and over the years I would see more of his acclaimed work, such as Paths of Glory and Lust for Life.   But even with a fairly small number of his movies I actually saw growing up, his name loomed large in my upbringing, again because my Mom and Dad were such fans.

I remember hearing that he was not happy about his son Michael being in some of the racier scenes in Fatal Attraction and later in Basic Instinct.  Nonetheless, whatever estrangement they may have had, in later years the two became close, and Michael emerged as a major defender and champion of his Dad's long legacy.

So RIP Mr. Douglas, you gave the world a body of work we will enjoy for years go come.  You also handled yourself with a maturity and class long lost in our own troubled age.  You represent the better parts of what we've lost.   May God's peace find you in the hereafter, and His grace and strength be given to your loved ones and all who remain behind.
Posted by David Griffey at 6:40 AM No comments:

If news releases are to be believed, Rush has announced he has advanced lung cancer.  I was never a big fan, and saw in him many of the problems with the emerging conservatism of the post-Boomer era.  Nonetheless, like President Trump, he was an imperfect bulwark against the emerging evil of post-liberal secularism.  Even if he wasn't any of that, however, I wouldn't wish something like cancer on him, or anyone.  I grow tired of hearing that word.

Prayers for him and his doctors.  Nowadays caner is not always unbeatable, but is best beaten early on.  Whatever, may he make his peace with God and reflect on his life's contributions.  He has played a major role in our nation's history, and in many ways stood against forces of gathering shadow in our lifetime, even if he didn't always notice how ubiquitous that shadow was becoming.  But then, being imperfect would merely put him in the same category as me, so that is hardly damning criticism.

God grant him peace and comfort and even joy to know that grace abounds and in God's arms, all are safe.  Peace and strength to his loved ones, and all the skill and knowledge that his caregivers will need to help him through this time, wherever God's path for him will lead.
Posted by David Griffey at 3:28 PM No comments: