So criticizing George Soros makes you a Nazi

Apparently.  Not just the kindly and tolerant Sarah Silverman, who declares antisemitic a host of conservative viewpoints: 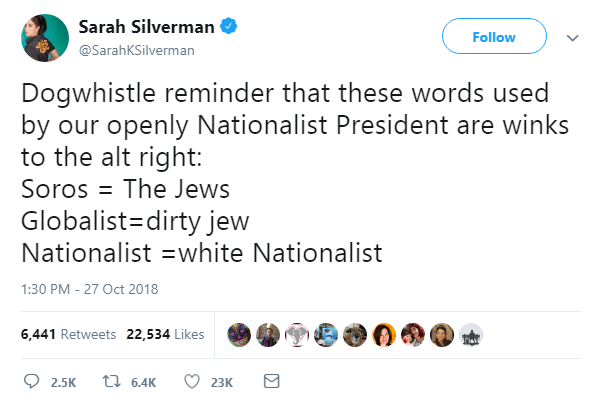 But a growing chorus of American leftists and sympathizers are declaring that since some who hate Soros might do so because he is Jewish, therefore all criticism of Soros is now Nazi.  This is similar, of course, to the tactic that labeled as racist any and all opposition and criticism of Barrack Obama.  It's a powerful, crushing tool for censorship and eliminating dissenting views.

Soros himself is a massive supporter for hard left wing causes, funneling millions into movements to advocate unbridled abortion rights, extreme feminism, LGBTQ agendas and even fostering the recent anti-police rhetoric that was no big thing while police were being murdered across America.  Because, remember, back then rhetoric didn't count and couldn't be blamed for things.

Now, in the latest incarnation of principles, rhetoric does matter, including any open criticisms of one of America's biggest supporters of radical leftist causes.  Again, this is a powerful weapon that is wielded by the Left, because it taps into the unforgivable sin of racism, which strips away the humanity of all perpetrators, and is used to burn America's heritage and history to ashes.  Anyone even slightly tinged with an accusation of racism can - and increasingly should - have their lives destroyed, their futures ruined, their reputations annihilated, no questions asked.

I have no doubt that there are those who hate Soros because he is Jewish. Most, however, hate what he does, how he does it, and why.  It is they that this tactic is primarily aimed at.  Think on it. Why make a fuss about it being antisemitic?  Would that matter for those who really are?   No.  It's a warning shot across the bow, that Soros is now invulnerable.  Any criticism of him will mark you as Nazi, racist, the irredeemable.  Wade into any criticism of him at your own risk.  And if people like Silverman have their way, any criticism of anything left of center will get you the same.

UPDATE:  Apparently it's not just Soros, but saying anything negative about Globalization is now a secret code for 'Praise Hitler!'  Abolishing national identities and establishing a singular world order is hardly a Jewish thing, though there are likely Jewish people to the Left of center who embrace it.  It is the ultimate goal of the Left.  A world with one class to rule them all.  It almost smacks a little of apocalyptic prophecy if you get down to it.  When old dispensationalists used to speak of that being the end goal of the Antichrist, we all chuckled.  But now, given what is behind this push for Globalization (not Jews, but the Left in general), it's not hard to use your imagination and make the connection.
Posted by David Griffey at 4:26 AM