Where is the pipe bomb news?

Just asking.  I don't have access to Cable News, so perhaps it's being covered there.  But last I saw on a CNN streaming clip, they were talking about something else.  Though that was a while ago.

Print media will have to wait, naturally.  But where is the constant updating?  Where is the round the clock coverage?   I mean, we had serious death threats made against our news media, and against national political figures including former Presidents of the United States!   Shouldn't that be at the top of every search?  Shouldn't there be special 24/7 links keeping constant updates?  Shouldn't every search list the latest stories about this attack on our very existence as a free people?

Look below.  That's what I get with a News search of the latest updated news.  There is one about the packages sent to Biden and De Niro.  Mostly those are just recapping what we already knew, with some detail about who was there and who found what.

Nate Winchester pointed out the somewhat eerie similarities to this and the Las Vegas shooting, at least in how wacky it all seemed.  To this day, we know virtually nothing about the biggest mass shooting in modern American history.  And in over a day since the first bomb threats (more if you count the one against Soros), we have - nothing.  We know no more than we knew yesterday when the first bombs were detected.  Why?  Not just that we don't know anything more, but the press doesn't seem to be focused on it the way you'd think.

Nothing really here, just an observation about one more screwy thing about this whole news story that doesn't quite mix. 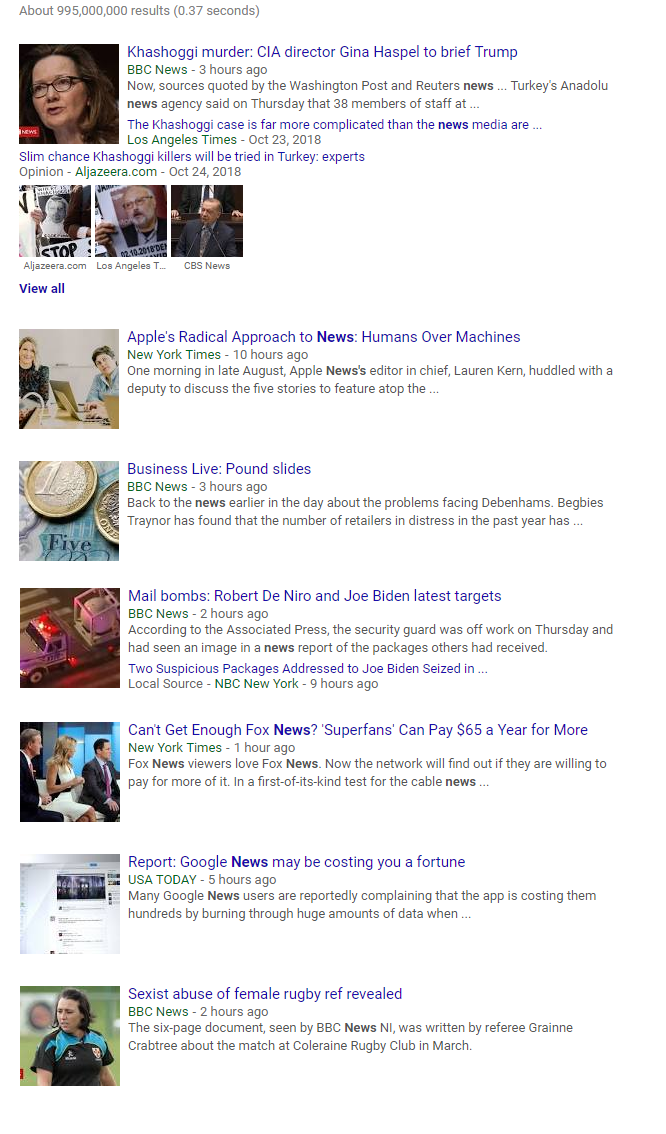 Posted by David Griffey at 3:48 PM