The Pipe Bomber and all those False Flag theories

My boy was right about the pipe bombs.  It was a person, per the NYT, with serious mental issues.  He was wrong in that a person with those mental issues could carry out such a wide range of threats.  But he was right that no serious person with a right mind would think that in doing so, this would help the GOP.  Anyone with more than two brains cells to rub together would know that the GOP, conservatives, Trump and all Trump supporters would immediately be blamed for such a thing.

That's what people like Erick Erikson and Russell Moore miss. 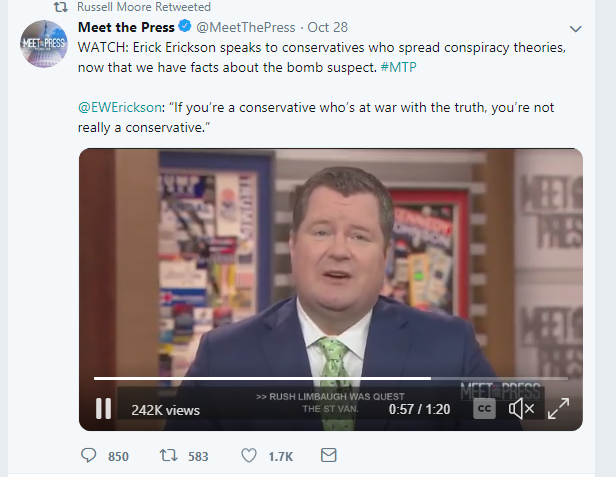 Those who rushed out with the 'False Flag' theories and conspiracies and speculation were basically thinking it through.  It made no sense.  Polls were going the GOP way, Trump was looking better than he has in recent months, the great Blue Wave had all but disintegrated - why would anyone rooting for Trump/the GOP do such a thing?  Any sane person in the world would know that the press/Left would immediately take any such attacks or threats as proof positive that it is Trump's Fault, indicative of American conservatism, and should, per George Stephanopoulos, impact how people vote in a couple weeks.

Therefore, the perpetrator had to be bat-nuts barking-mad stark-raving-insane, or a partisan operative working for the Left.  It turns out it was a man with a long history of mental illness, per the NYT.  Again, the mistake my son made was thinking a person who is that mentally unbalanced could not pull off a well coordinated action like that.  It seemed a stretch.  After all, he had to mail multiple packages all over America and have them arrive near the same time.  Try mailing one thing and hoping it gets to a certain spot at a certain time by normal mailing.  Much less mail a dozen things and have most of them arrive at the same basic time.

But madness does not always equate to incompetence or to lack of cleverness or resourcefulness. And that was the mistake.  Otherwise, it was entirely rational to ask just why a conservative operative would do such a thing when there was no sane reason in the world at that time to do such a thing.  And it turns out, those asking that question were correct.
Posted by David Griffey at 7:00 AM