Just because it's my blog: My favorite arcade video games.

Like some old codger sitting by a fireplace and regaling his grandchildren about his days fighting the huns, I tend to talk to my boys about the 'good old days.'  I inform them that, unless you had a terrible life you wish to forget - and hopefully that doesn't include them - you tend to look back, remembering with fondness the good times, and letting the bad times fade into memory.  Always remember the bad times were there, that way nostalgia doesn't melt into unreal sentimentality that can hamstring your ability to deal with the real world.  But never feel guilty for looking back and pondering the good times of old.  Long after their Mom and I have passed on, they'll only have the stories to remember, and that's what makes it a very human thing to do.

One of the things they ask about is what it was like in the early days of the big tech boons that they take for granted today.  What was it like in the early days of cable TV, or portable phones, or personal computers, or VCRs, or video games?  They find it hard to believe that there was a time when there were entire buildings - vast, cavernous rooms - dedicated to endless rows of video game consoles, with hundreds and hundreds of gamers standing there, popping quarters by the ton into the games as passersby stopped to watch the action.

It's true.  I was never a big video game fan, but I had my moments.  And there was an end game to those old arcade games.  It was seeing your initials at the top of the High Scores list at the end of each game.  And there was a time when playing a game could end up with dozens of strangers standing around, rooting you on.  I can remember Pac Man.  I only played it a couple times, but I remember people standing around three rows deep if someone was playing it well or even making it past the first few levels that anyone could handle.

We were talking about this last week, and it got me to thinking about some of the favorites I did have at different stages in the video game phenomenon, as well as stages in my youth.  Below are the ones I remember playing, even for a season, with some form of regularity.  Nothing big, but at the end of the craziness in the world today, it seems almost sane to think about compared to the alternatives. 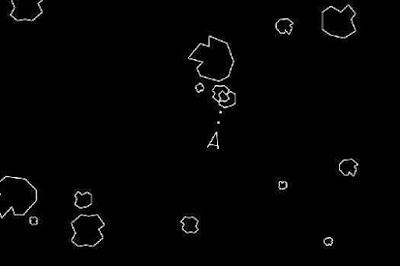 Asteroids.  This was the first arcade game I ever played with any regularity.  It was located in one of those old KMart knock off stores that was located in Marion, behind the old (now abandoned) Pizza Hut.  That was the same PH I worked at in my early college days.  By that time, the store was there, but the game was gone.  But back in my early high school days, whenever my Mom went there, I made sure to bring quarters along.  While she shopped, I did my best to stay alive on the fewest quarters possible.  My best friend, Kelly, sometimes came along.  As always, he was far more versed in such things, and could do a much better job survival-wise. 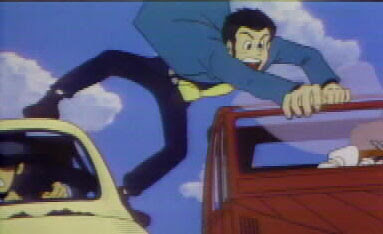 Cliff Hanger!  This was in Marion's only shopping mall, the closest big town near the small farming village in which I grew up.  About a half hour away (or half that as I drove it), it was our main hangout on a weekend.  This game was under most radars.  Borrowing the Laser Disk technology that made Dragon's Lair a smash hit, it was heavy Anime style about two hapless casino thieves rescuing a kidnapped bride from the clutches of some super-villain.  Sort of Smokey and the Bandit meets James Bond.  Don't know why, but I determined to get through it to the end of the story.  Being one of the few video games with an actual end, I had that goal to shoot for.  And after about two years of hunting it down once it moved from the mall, I finally did it. 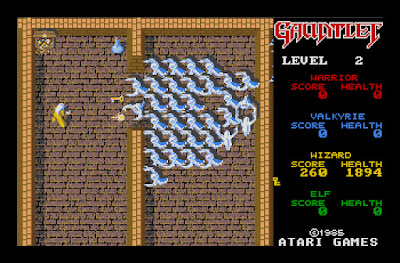 Gauntlet.  Wizard needs food badly!  Ah, this was in the old Dairy Mart down the street from where I lived for a few years when I was in elementary school.  My best friend had seen the game while at Columbus campus the year it was released (1985), and we spent more than a few nights pouring about $20 worth of quarters each to make it through endless mazes, demons, ghosts and goblins. That was near the end of what I call the Great Fantasy Renaissance, which kicked off in 1977 by the release of Star Wars.  Though my friend would never be caught dead within a hundred yards of something like Dungeons and Dragons, he had no problems playing video games that were obviously inspired by the same.  This chewed up the first year of college when he was back from school, especially during our first Christmas break. 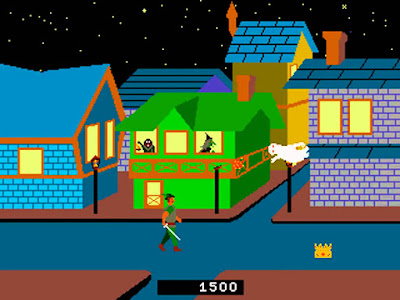 Crossbow.  Don't shoot your friends!  Speaking of playing games that my best friend wouldn't be caught dead near if they weren't electronic, this was another one he discovered.  It was in the lobby of the movie theater attached to Northland Mall in Columbus, Ohio.  That was the mall in all of central Ohio.  At Christmas, the police would issue warnings to people to stay away from that area of northern Columbus because it became so packed and busy.  Today it's a parking lot.  But then it was the cultural/hang out mecca for everyone in central Ohio that was under 25 years old.  We went to the movies when I would visit him, or sometimes if we were down in Columbus just for fun (or looking for girls).  To kill time, we played this several times.  As usual, I was less competitive than he was, so ended up being the cause of most game ending casualties. 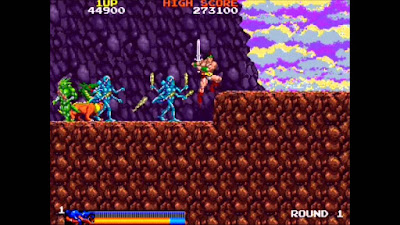 Rastan.  This was in the small arcade in the Ohio State University Student Union.  Back then, the Union was mainly classrooms, conference rooms, a cafeteria and some fast food shops with a McDonald's as the anchor eatery.  The arcade was in a small area between the cafeteria and one of the conference rooms.  There were probably about a dozen or so games, and this was one.  During my autumn quarter, I had a class at noon (geography), followed by my last class of the day, Western Civ 101 at 3:00.  That gave me enough time to have lunch, relax, and then study play this game I discovered.  Though well past either the D&D fad or the general Fantasy Renaissance, it was obviously inspired by both.  It was fairly popular, though the whole of the Video Arcade was already beginning to run its course.  By the next quarter, my schedule changed and I wasn't around the area with enough time to bother.  By the time I would have time to hang around there again, the game had been removed.  Nonetheless, autumn quarter of my Junior year, 1987, found me, between the hours of about 1:00 and 2:00 PM, with an endless supply of quarters trying to help our intrepid hero battle chimera, lizard men, gargoyles and falling boulders. 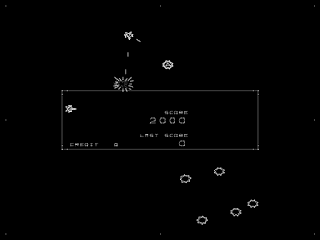 Omega Race.  What?  Most have never heard of this.  At the end of my 6th grade year, for no particular reason, my parents moved out of town and onto Rt. 95.  There was nothing nearby except two houses with grown adults and no kids, a gas station, the town's main factory, and across the street, our local bowling alley.  Oddly enough, I never cared enough to learn to bowl or play pool, though both were available.  What I did do, however, was save up quarters from mowing the neighbors' yards or shoveling snow to go across the highway and play this game.  Of all games I ever played, I came closest to this to topping the High Scores. I made it to second place.  It might have been because nobody played it much, and the competition was minimal.  Nonetheless, I saw it as a thing of pride that people began to come over to see if today would be the day I made it to the top.  I never did make it to the top.  But for most of my 8th grade year, I had this to look forward to at the end of each school day. 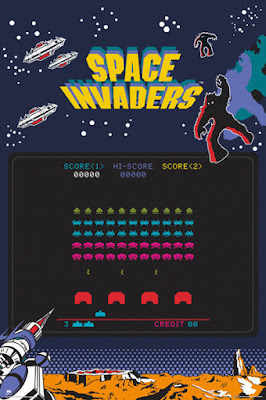 Space Invaders.  What can be said?  The one the started it all.  Just slap a space picture on the side and suddenly the pixels have an identity and a purpose, as does the player.  I actually only played it once or twice in arcades.  By the time it came to any venues that were near me, it had been surpassed by other, more advanced game.  I first heard about it in 7th grade on a school trip to a roller rink (remember those?).  Naturally, my best friend, who was typically well ahead of the cultural curve, had already seen it.  A kid named Randy was playing it when I came over and saw it for the first time.  Given that video games had, up to that point, meant Pong, this was quite a change.  When Atari grabbed the licensing for this and teamed up with Sears, it was the game to have.  It was the closest to my own BB Gun Christmas I ever had; begging  my parents on a daily basis for the console.  My Dad came through in flying colors, not only getting the game plus a couple extra, but also a new color TV on which to play it.

So there you go.  There were always others that we played here and there or once or twice.  And naturally it doesn't count those home video games which always seemed fun at first but, to me at least, passed their sell-by dates fairly quickly.
Posted by David Griffey at 7:00 AM