A tale of two fictional priests in time for Halloween 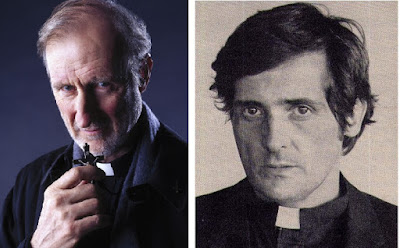 Before I begin, allow me to say something.  I hear many people state that the problems with the Christian Faith in general, and the Catholic Church in particular, are due to compromise with a modernist, secular world view.  They've gone liberal.  Hence the problems.

The retort is that the Church has always had problems.  It's had them for 2000 years.  Heck, the only reason we have a New Testament is because the Apostles were writing to address problems in the earliest Church.  That is true.

For the past several generations (centuries maybe?), the Christian Faith as a whole has been following the world and adapting accordingly.  Dare I say, there's little difference between the model of the universe as understood by atheists and secularists today, and a model of Christian Creation as understood by a majority of believers.

That observation isn't new, and each year I'm reminded of a couple authors who had already picked up on the growing secularization of the Christian Faith in general, and the Catholic Church in particular.  Stephen King in his novel Salem's Lot, and William Peter Blatty, in his novel The Exorcist.

In both cases, you have priests who are undergoing their own version of a crisis of faith.  And in both cases, it's largely the result of the Church having adopted a secularized, modernist - dare I say, atheistic - model of reality.

Fr. Callahan, from Salem's Lot, bemoans the loss of the good old days; back when the  warriors of God did battle with heretics and infidels, fighting and believing in real devils and demons lurking in the shadows and the corners of civilization.  The Exorcist's Fr. Karras, on the other hand, has almost lost his faith.  When Chris MacNeil, the mother of possessed Reagan MacNeil, approaches Fr. Karras about an exorcist, he openly scoffs.  He suggests getting into a time machine and going back to the Middle Ages since nobody - but nobody - believes in that silly stuff anymore.

Of course we know that both of them are confronted with powerful challenges to their attitudes.  Fr. Callahan gets more than he bargained for when it comes to fighting those real life devils and monsters.   Fr. Karras, despite a heroic attempt at remaining skeptical in the face of the supernatural, eventually has to concede what is obvious to everyone else.

The point is, they both represent what these authors saw in the Church at that point in history - many generations ago.  Already the Church had sold out, had compromised, had gone secular.  Oh sure, in the Mass, you get your Jesus and Mary and angels and, perhaps on rare occasion, that rascally Devil.

But in the real world, the Church has been trying to make sure that whether in the university, or laboratory, or hospital, or psych ward, there simply is no difference between what an atheist would say and what the Church says. Let a priest sit next to an atheist scientist to discuss the history of the universe, and you can barely slide a sliver of paper between their views.  Listen to a Christian counselor and a secular psychologist, and there is scant difference.   Listen to all but the most conservative biblical scholars, and there is little to distinguish their appraisal of biblical history and that of an unbelieving anthropologist.  There just isn't much difference anymore.

The same, therefore, is likely true of a great many believers.  Oh, on Sunday and at divers times throughout the week, we'll speak of heaven here and a prayer there.  God always ranks high, since believing in God is so easy even demons do it, and shudder.  On Sundays, especially, you get angels and demons and God and Jesus and heaven and all that jazz.

But step out the door, and go back to work, and it's the world of atoms and molecules and DNA and evolution and psychoanalytical theory and computers and digital technology and brick and mortar and a vast universe with none but a pointless speck of dirt called Earth.  And that's increasingly the point of view of Christian leaders and thinkers.  It gets less spiritual with the actual worldly appraisal of things.

Modernity is the great heresy of Christian history; the greatest since Arianism.   Modernity has heard the Gospel, and denied it.  It has said that Jesus - if He existed at all - was no more than some obscure son of a first century floozy who got the business end of Roman justice for being some hippy appearing social revolutionary.  Virtually everything about God - if not God Himself - is rejected along with the biblical narrative.  The Christian model of Creation is all but rejected.  And every day it seems, Modernity emerges with new theories or revelations that challenge almost anything and everything that Christianity once proclaimed.

To merge these two views is like tossing a clean washcloth into a mud purple.  When it's over, you'll still have a mud puddle with a dirty washcloth.  The puddle itself will not get cleaner.  I say it's time for the Faithful to put on the brakes.  Realize that much of what has been peddled for centuries will, in a thousand years, have long been discarded as silliness.  Reclaim a God centered, Christ driven, Holy Spirit led Creation brought through Sacred Tradition and the pages of Holy Scripture.  Call out the world for its errors and the manifold holes in the billion theories it peddles on a daily basis.

My two cents.  Happy Halloween.
Posted by David Griffey at 7:00 AM

Email ThisBlogThis!Share to TwitterShare to FacebookShare to Pinterest
Labels: Musings