It means we celebrate cultures of warfare, conquest, human sacrifice, matricide, patricide, infanticide and even slavery - as long as it isn't white people. 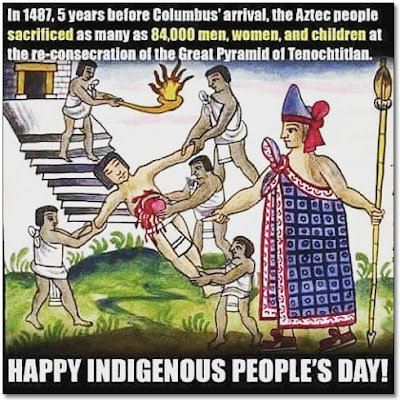 Yep.  That's a hallmark of multi-culturalism.  If it ain't white and ain't Christian, it ain't evil.  As the late Dr. Glenn Stassen* once explained in an ethics class, the Mongols were just doing their thing.  If the people they conquered hadn't resisted, they wouldn't have been slaughtered. Don't blame the Mongols.  The same is true for any non-Western/American culture.  There simply is no evil by virtue of being a non-Western/American culture.

That is the mentality of the Left.  Slavery and warfare and conquest can be wonderful, as long as Europeans and Americans didn't do it.  Consider where  that mentality will take us in the future.

Christians who endorse this madness do so at the risk of their souls.

*c. 1995.  I was quite the fan of Dr. Stassen, don't get me wrong.  But he exemplified the growing liberal multi-cultural attitude that evil only existed in the Christian West, with all other cultures not being morally culpable by virtue of being all other cultures.
Posted by David Griffey at 6:30 AM