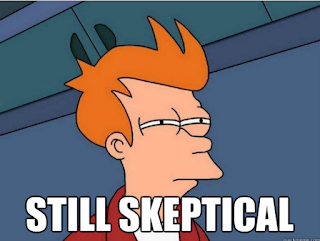 But all of a sudden, weeks out of a midterm election that was seeing the Blue Wave diminish, we have a sudden spate of attacks against left wing politicians and activists.  Out of the blue, protesters disrupt Nancy Pelosi in a public event, calling her a communist.  Then George Soros received an explosive device.  Now the Clintons and Obama received the same.

What's wrong with this?  It makes no sense, that's what's wrong with it.  One of the things that has garnered a certain level of sympathy for Conservatives has been the almost weekly stories of Republicans and conservative politicians being assailed in public, threatened, attacked and assaulted.  We had actual poison sent to Republican offices, and multiple verified claims of Republicans assaulted in public.  In most cases where Republicans were swarmed and shouted at in public places, you had groups like Antifa proudly taking responsibility.  Or you had the culprits arrested and often identified with the political Left.

During all of this, the Leftist brand was suffering.  Sure, it might not make people vote for Republicans or against Democrats, but it sure wasn't helping Democrats.  And only last week, people began questioning if there would be a Blue Wave at all, if the Democrats might only get one House in Congress or - horrors! - they might fail to get either.

Then, all of a sudden, for no logical reason in the world, anonymous sources begin lashing out against - Democrats!  Of course the press is all over this.  Suddenly, Democrats are in fear for their lives.  No doubt Right Wing extremists are charging forth in their typical Nazi ways!

Should it be investigated?  Sure.  Should these be treated as serious threats by the authorities?  Of course.  Is there a logical or sane reason it should happen?  No.  Does that mean there are no insane people on the Right who would nonetheless do such a thing?  Of course not.

Nevertheless, thinking people with more than half a brain must be somewhat suspicious.  After all, these tactics were, at best, not helping the Democrats and at worst were helping the Republicans.  Now, with two weeks to go, when the Blue Wave is appearing to break up, you have the exact same thing that was hurting Democrats, coming from anonymous sources, now happening to Democrats?  At some point, unless proof is offered otherwise, sanity and common sense and basic appeal to the easiest solution will suggest this is meant by someone other than conservative activists to frame the opposition, and nothing more.

UPDATE: So even as we speak, one Democratic or Liberal news organization after another is reporting getting similar explosive devices.  Scratch 'Insane loony' off the list.  This is obviously well planned, thought out, and well funded.  Anyone able to pull this off without being caught the day it happened is not insane.  Which then brings the question:  Why would anyone not insane or loony do this is they are Republicans/Trump supporters?  The optics have been overwhelming bad for the Left over the last months of assaults and confrontations aimed at Republicans.  The death threats, the poison envelopes, the physical attacks have all, at best, not helped the Democrats.  At worse it has helped the Republicans.  So why would someone not insane and able to pull off such a well funded and coordinated threat do so?  What would he hope to accomplish?  To take away from the bad press the Left was getting?  To make it look like Republicans are just as bad?  To give the press the chance to link terrorism to the Right?   Who on the Right, sane enough for such a coordinated attack, think that would help?
Posted by David Griffey at 10:33 AM