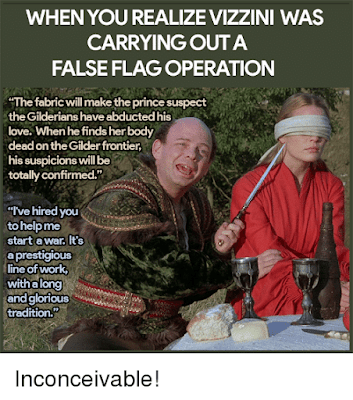 So the Pipe Bombs are all the news.  Around the clock the media is outraged and frightened, since several media outlets were targets of the failed pipe bombs, along with exclusively liberal politicians and activists.  The verdict is in.  Unlike the shooting of Republican congressmen Steve Scalise at a baseball park, in which we were told there was no connection to be made with political motivations, this is being portrayed as everything from pure Right Wing terrorism to the fault of Donald Trump.

The problem, as my second oldest son pointed out, is that anyone dumb enough to think this would help the Republicans wouldn't be smart enough to pull off a vast series of coordinated attacks against multiple targets across the country all on the same day.    And that continues to be the big bugaboo.  There simply is no sane motivation for a conservative activist to do something like this.  Everything was trending in ways that were far better than Republicans could have hoped for six months ago.  The Democrats were struggling.  Radical Leftists were leaving a bad taste in the mouths of many Americans.  So why would a conservative or Republican activist think this would help?

Of course there is plenty of reason to be suspicious, the lack of sane motivation being the most glaring.  Another is the speed with which everyone immediately dismissed the idea that this could be done by a liberal or leftist activist, or any other non-affiliated activist (Russia anyone?), as if such a thing has never happened in the history of the planet.   Here, National Review jogs our memory with examples of faked scandals meant to make someone else look bad.

And furthermore, this sudden disdain for anything but pinning this on the GOP comes from the same sources - the press - that were quick to insist that you couldn't pin the baseball park shooting on anything political.  Even if the shooter was a vocal Democrat, Bernie Sanders supporter, who swore against the GOP and promised to finally stop the Republicans at all cost when he went to gun down Republican congressmen exclusively, there was still no connection to politics.

My sons, in discussing the developments, have speculated that it could simply be the latest in a string of attempted October Surprises.  The others - the Kavanaugh hearing, the Saudi journalist, the immigrant caravan - have not had the 'GOP as Nazi!' impact that the press/Left had hoped.  Perhaps this is a last ditch effort to do anything to stem the tide turning against the Left.  Who knows?  My sons, like I, concede that if proof of conservative or right wing operatives is found, then obviously it needs condemned and the criminals prosecuted and blame placed where it belongs.

But we'll at least wait for someone or something to be caught or discovered.  As itchy as the Left is to set aside due process, presumption of innocence and burden of proof, we'll withhold any judgement until we know more.  Perhaps that will set an example to those who have already declared all Trump supporters assassinating murderers who need to be crushed once and for all - without evidence.   We will also pray for peace and that our country turns back from the brink before such things don't include lame devices doomed to fail.

UPDATE: The first valid reason has been offered why someone on the Right would do such a stupid thing.  Apparently one of the pipe bombs had some Islamic insignia on it.  It is possible that some wacked out, white nationalist type would try to frame Muslims in light of the upcoming Caravan of Immigrants.  Again, it would take a coordinated effort, and there would need to be many involved.  But it could be.  Fair is fair, this would make sense.  IT wouldn't bear down on the GOP, and given that the GOP universally came out and condemned this, as did conservative media outlets like FOX News, there is no reason to blame them for this.  Though betcha they will be blamed no matter what.  We'll see.
Posted by David Griffey at 5:55 AM

Email ThisBlogThis!Share to TwitterShare to FacebookShare to Pinterest
Labels: Defending Liberty, Hypocrisy, News, The media and the Left but I repeat myself