Speaking of reposting, here's one of my first posts I thought of as I look at the window at the magnificent October clouds rolling by 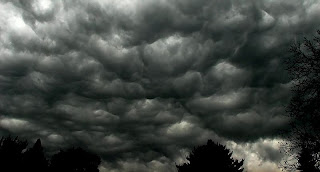 I suffer from terminal nostalgia. I don't know why, but I've never been able to shake the tendency to see in every picture, commercial, or movie, or hear in every song, or see in every cloud or tree or rock something that makes me think of times gone by. For instance, one October evening the first year I was in college, I drove to meet up with a friend of mine. He was Catholic, though the extent of his devotional life was never apparent. Nonetheless, he found employment that fall by mowing the yard of the parish rectory. Not that I, a burgeoning agnostic, had any idea what a rectory was. It was just the place where the priest lived, situated next door to the modern styled Catholic church sitting in the middle of sparse woods and vast corn fields, now harvested and bare. His mother told me where he was - this being before cell phones - and I drove out to meet him.

He was just finishing up. The parking lot was empty. He had been dropped off. I guess he either expected me or a drive home from his parents. It also was a Friday night. In those parts, that meant high school football. Even though we were college freshmen, our connections to our high school Alma mater were still strong. We quickly made some plans to see if there was a home game.

Then, as we were getting into my truck, he paused. He turned around and pointed to the sky. It was one of those fall skies with heavy, billowing gray clouds that just inch across the landscape. I never had really paid attention before. But he said, as he looked up at the sky, 'I love it when I see clouds like that. It's so October, so fall. I just love it.' Now he was never one prone to poetic musings or deep reflections. So his little statement caught me a bit off guard. I looked up and agreed. Then we got into the car and drove somewhere and did something that has gone into the long list of forgotten memories.

I will never forget that moment, though, that scene in my life; that evening, standing in the empty lot surrounded by barren fields and staring at a chilled, gray autumn sky, will stay with me as long as I live. I never see a cloudy fall day that I don't, at least for a minute, travel back in time and remember that instance with a friend long gone in a time long past. It's for that reason I say I suffer from terminal nostalgia. Perhaps, in the overall scheme, that's not bad. After all, remembering is a fine thing, and one that helps counter the tendency today to see everything beyond last Thursday as irrelevant. And while we don't want to look back after putting our hands to the plowshare, we don't want to focus only on the future and forget all that has come before us, and all that God has done.

Remember His wonders which He has done, His marvels and the judgments uttered by His mouth... Psalm 105.5
Posted by David Griffey at 1:20 PM