No!  She's being attacked by Simcha Fisher and the world of Catholic Social Media.   Why?  Well, it looks like this.  Apparently Simcha posted a Facebook article in which she said that the parents of the boy whose actions led to the killing of a gorilla in the Cincinnati Zoo might not be guilty of any wrong doing.  Sometimes kids act out and it's not the parent's fault.

Fair enough.  Sometimes they do.  Sometimes they don't.  For my money, a little accountability in our day and age might do us adults some good.  That does't mean, of course, that the parents in question are guilty.  Most of the comments followed that line of non-accountability, a line not exactly uncommon nowadays.  But a couple bucked the trend, including Melissa Cox, the aforementioned judicial candidate.

Apparently Ms. Cox is made of stronger material than me, or is more patient, or maybe even naive.  I don't know. She stayed and tried to make the claim that yes, the parents might be guilty of wrong doing.  When pushed, she admitted she wasn't there.  Apparently there were some bystanders who were there who frequent Simcha's Facebook page.  In reaction to that, Ms. Cox explained that there could be many factors behind why a parent might or might not be guilty: Drugs. Alcohol. BAM!

That was what done her in.  By bringing up those examples, she was accused of falsely accusing the parents of being drug addicts and alcoholics.  Simcha and others swooped in and laid layer after layer of condemnation and contempt on Ms. Cox for being judgmental and sinning by bearing false witness against the parents.  I don't know the full extent of the discourse, because eventually Ms. Cox left and deleted, or blocked, her statements.  Those I did see were kept by some of the readers: 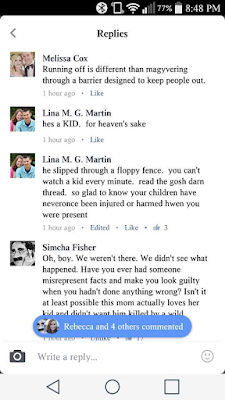 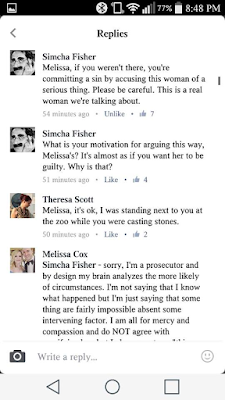 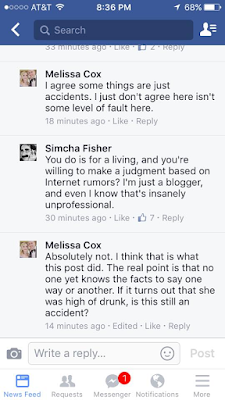 As the comments continued to pile on, a growing number of readers shook their heads at just how much of a disgrace Ms. Cox was to the legal  profession.  Soon Simcha floated the idea that she might have brought the drugs question up because the parents are Black (and you know what that means). Naturally others ran with the race card.  During that time a bright light came on.   While Simcha stated she didn't want to ruin anyone's career, she and others  then converged and began shouting out to different individuals from Ms.Cox's district; calling on reporters to dig up dirt and rake up some muck, calling for articles to discredit her and work to wreck her life, her career, her livelihood:


Simcha Fisher Rebecca Kavan If you are interested in pursuing this, Damien says you should contact the Detroit Free Press and let them know you have a tip, including screenshots, of some nutso stuff that judicial candidate and prosecutor Melissa Cox said on Facebook and then deleted. You could contact Charlie LeDuff, who is a muckraker and might be interested. This is stuff that should disqualify her to be a judge.    (Emphasis mine) 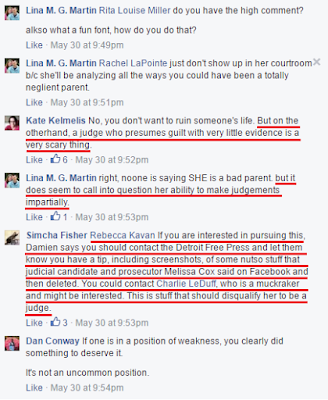 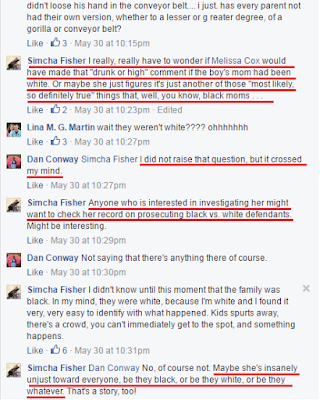 Wow.  My head is still spinning. This is not an endorsement of Ms. Cox, BTW.  I don't live in Michigan.  I don't know her from Eve.  For all I know she dresses like Himmler in drag and attends KKK rallies.  I have no idea.  Perhaps some of the comments that were deleted that nobody reposted showed her true colors,  Maybe in those missing comments she guffawed at the dead gorilla and officially made a legal charge against the parents for being drugged up while their child was put in mortal danger simply because they were Black.  I don't know.

Three things, however, suggest otherwise.  First, with a little bit of research, I found several sites supporting Ms. Cox's campaign.  I noticed many had African Americans, and among those were people who seemed to reckon Ms. Cox as a friend.  This, in addition to a laundry list of endorsements and awards for her legal career up to this point.  Forgive me for bucking the John Lennon principle of Liberalism, but I look at what a person does and how they live, not what people on Social Media say about them or their failure to speak the Sacred Word of  Correct Thinking.

Second, the copies of her comments that were posted were nothing close to what she was accused of saying.  They were merely posts, musings, opinions not shared by Simcha and most of her followers.  They were thinking out loud about what possibilities might and might not implicate the parents.  That they were seen by the followers as official accusations rather than opinions brings up the Third point.

I know all too well the tendency of Social Media to go straight to lunatic, partisan accusations.  I recognize the tactics, the 'I would never ruin a person's career' followed by calling for people to flock to the individual's district in order to ruin that person's career.  I also recognize the fact that Simcha and her followers were attacking Ms. Cox for making a false accusation (which Ms. Cox denied) by then piling on multiple false accusations against Ms. Cox, mocking her, deriding her, spewing contempt on her, and then, as can be expected in our modern climate, playing the race card.  After all, the family was African American, couldn't that be why Ms. Cox suggested drugs or alcohol?  Not saying it is the reason, but you know. All of this, and then moving to have the young woman's career derailed and her campaign damaged.

The sad irony in all of this is that based on Ms. Cox's quotes that were provided, that others referenced as justification for the witch hunt, this represents a gross violation of the Church's clear teachings on how we are to interpret the statements of others.  Basically we are to assume the best unless we prove otherwise.  And yet Simcha and her followers took the absolute worst possible spin on what Ms. Cox said, piled on, and proceeded to call for her judicial career to be harmed.

Despicable.  It made me ashamed to be Catholic.  Hey kids, Catholic kids I mean.  We Catholics have a reputation for the Crusades, for the Inquisition, for witch burnings.  It would do us well to remember this fact and not act like Facebook is the best alternative we have since the Rack and Thumbscrews went out of fashion.

As for the modern Catholic Church and its field of amateur apologists, I'm sure back in the day this seemed like an awesome thing.  Heck, Pope Francis says it's awesome now.  And I'm sure it can be a good thing, this idea that Catholics with no particular irons in the ministry fire can nonetheless proceed to the world of the Internet to lay down their opinions and insights, their views and reflections.

But watch out.  The Internet has no peer review.  It has no checks and balances.  It has no level of accountability.  I could start a blog based on molecular biology.  I could use my blog for anything I want.  When we have amateur Catholic apologists who feel that they can use their station and their popularity to attack the livelihood of someone about which they know nothing, then I dare say we've crossed a line.  To continue to give a nod to such people is to engage in the worst elements that have come to plague the world of Social Media.  That's bad enough.  But when you are doing so with the moniker 'proud Catholic', then think of what that says to a wider world.

To be an apologist is to be a minister.  Jesus didn't go through the agony of the Cross in order to provide us with a happy living and a Messianic shaped club with which to bludgeon others and be awesome on the Internet.  If people who go by the title Catholic Apologist can't handle the cause without using their position to advance agendas and, worse, harm the livelihood and lives of those they disagree with, then they shouldn't be apologists.  They certainly shouldn't be the recipients of praise and adoration from actual Catholic leadership.  That would be like giving a gun to a child who just used the last gun to shoot a classmate.  This is a wake-up folks.  Is this what we want people who represent our Faith on Social Media to act like?
Posted by David Griffey at 9:12 AM