Words cannot describe how much I hate this 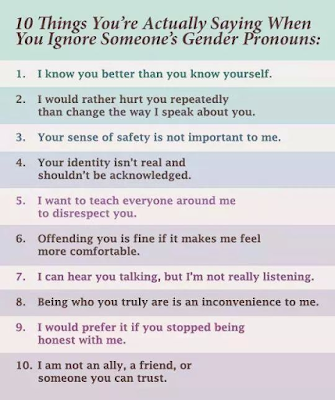 Note the meme.  It's already assumed that gender is an abstract.  That there's really no such thing as man and woman.  That my reality is what I say it is, and there is no greater reality than me and what affirms me and my reality.  And if you don't immediately convert to my reality and moral superiority, then buster brown, you're the baddie.

I know, a bit of an exaggeration.  But only a bit.  Not all conservatives think they are right about everything.  Not all liberals believe it's time for the government to eradicate non-conformers.  Though the number of liberals thinking that appears to be swelling.  And one way they are doing it in a free society is this wonderful sleight of hand.  Just get enough scientists to confirm that the latest liberal social trends are scientifically true, and you can now simply declare it case closed, and move on to shame those who refuse to comply.

Notice, by the way, the heavy reliance on science to establish morality.  As if nothing other than science can determine moral truth.  As if science has always been right in the past.  After all, science only recently considered transgender to be a disorder.  Then again, it considered homosexuality to be the same decades ago.  Within my lifetime.  Why was science wrong then but right now?  How do we know every time science changes its conclusions it happens to be right?  Are we that enamored by the infallibility of progress?  If we are, have we bothered to do more than take a single semester of history?  We do know that progress isn't always neat and orderly like that, don't we?  Like mutations in nature, a great many bold changes turn out to be disasters. We do understand that, ultimately, every idea and belief had its origins somewhere, and at one time everything was new, progress we might say?

Beyond that is the problem with redefining human nature and turning to science and technology to help us circumvent the natural order.  When people ask me if I believe in Climate Change, I say of course I do.  Whenever I look out my window and don't see glaciers and woolly mammoths, I'm reminded that climate changes.  Do I believe that our approach to industrialization and technological advancement might have had a detrimental impact on nature?  Sure.  I have no doubt the reworking of nature as subordinate to the human person, and using technology, rather than our natural abilities, to put down nature while shoving a growing list of artificial synthetics into our bodies was probably not the best idea.

So, for me, the lesson is don't give technology and science a blank check, especially when the promise is 'we'll change nature and you'll have everything awesome as a result and don't worry, nothing could ever go wrong!'  Fool me once after all.  Yet all who yell global warming, Global Warming, GLOBAL WARMING seem quite able to draw a thick line between the science that is sounding the alarm and the same science that science says got us here in the first place.

For me, lesson learned.  And it doesn't just apply to the promise of reworking mother nature for our ultimate benefit, it also applies to reworking human nature for our ultimate benefit.  If things ended up going so badly centuries later because of our first round of applying science to give us everything awesome, why are we so sure that things won't end up just as bad this time around?

Anyway, had to blow off some steam.  That we live in an age willing to take such a work of bilge and use it to force conversion and compliance to a set of values that appear to have warning signs dangling all over them, shows how far away from wisdom and common  sense we've come.  The worst part?  The meme was on a Facebook page of a friend from my high school days that happens to be a dean in a secular university.  A dean.  And this is what he posted, and was met with so much applause and thumbs up from his followers and students.  Calgon take me away.
Posted by David Griffey at 12:03 PM