Why are people suspicious about gun control? 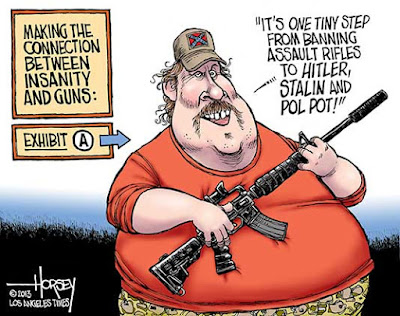 Given that many gun control advocates spew a contempt at gun rights advocates that rivals the assessment of Judaism at a Nuremberg rally might be a reason.   Bonus points if you noticed the little Confederate Flag on the fellow's hat in the cartoon.  That's because if you worship guns, you're not just an idiot and a gun nut, you're probably a racist, too.  A common progressive meme: if you are a sinner against one doctrine of liberalism, the likelihood is you are a sinner against all.

Another reason would be that many of those insisting they aren't out to take our guns have made other promises in the past, like the obvious fact that nobody would be punished or jailed over disagreeing with gay rights.  Or that the government would never infringe upon religious liberty over something like abortion or birth control.

Given those two things, I would suggest being suspicious is certainly foolish if you are a post-modern thinker.  If you prefer a more traditional approach to common sense based on principles, logic, and plain thinking, then suspicion might be the more prudent approach.
Posted by David Griffey at 12:17 PM