When Conservatives walked with God 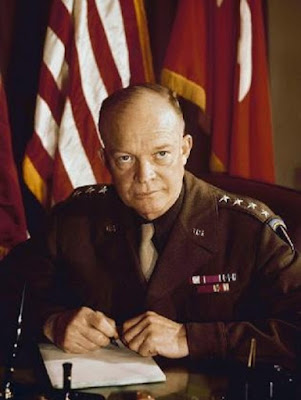 "I came to understand out of my own observation, that all plans for India's progress were going to fail unless some effective and practicable system of population control were adopted. At one time I had publicly stated that the problem of population growth in other countries was not a proper responsibility of the US government.

My trip to India convinced me that we could not stand aloof if requested to help. In spite of a high rate of infant mortality and inadequate health facilities, India was adding each year more than 5 million souls to her population. This could not go on. Until this Indian problem is solved all others will grow worse rather than better."

Source: Waging Peace, by Pres. Dwight Eisenhower, p.504 , Jan 1, 1965
Now I have no beef with Eisenhower.  I think he was an excellent General and a so-so president.  My dad, a veteran, was no fan, because he perceived several of the policies Eisenhower enacted regarding the military as baneful to veterans and servicemen.  Whether they were or not, that is how he perceived them.  Of course my Dad, at the time, was a Democrat, so there you go.
But I post this because one of the current memes among non-Conservative Conservatives is the story about how 'I once was a Conservative when Conservatives were real and beautiful, but ever since that liar Reagan and neo-cons took over and it's all gone to hell.'  This is sometimes why cozying up to the Left and hating on anything to do with Conservatism or Traditional values is seen as justified.  These folks hate what Conservatism has become, but if it was like it was back in the Eisenhower days, then it would all be hugs and kisses again.

Of course not.  That's laughable.  And I'm not saying, BTW, that Eisenhower was therefore some scum or pro-culture of death type.  I'm merely saying spare me the laughably false and demonstrably inaccurate notion that "Conservatism" is somehow all bad now, when it was almost all awesome then.  If you wish to trash Conservatism, then do so.  If you want to compare and contrast some military philosophies then and now, go ahead.  If you wish to cuddle up with the triumphant Left, no problem.  But if you take it to the next level and attempt to justify it all by suggesting that, unlike the glory days, Conservatives today are all evil and not being pro-life enough, then do your homework before you set modern Conservatives against some idyllic Eisenhower form of Conservative that, by the definitions used against Conservatives today, would have been no better.
Posted by David Griffey at 9:54 AM