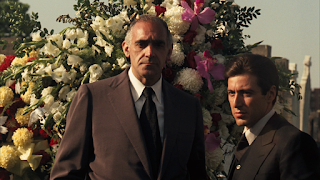 I'm sad, and a little guilty.  Abe Vigoda has died. The poor man became famous in our house as the fellow who was always thought to be dead.  Apparently we weren't alone.  He even made a minor comeback a few years ago in a Super Bowl commercial (the same one that re-jumped the career of Betty White), that caused a new wave of 'I didn't know he was still alive!'.  Of course he is most known as the ill fated Tessio from the monumental film The Godfather, and as Fish from the 70s TV show Barney Miller.  But the ongoing joke that he was already dead had almost surpassed the Paul is Dead rumors of the late 60s.  So it's with a little shame and much sorrow that I must say goodbye Mr. Vigoda.  I hope you were a good sport about it all.  It seems you lived a good, long life.  Peace be with you and yours, and God's blessings for the joy you brought to my generation.  Even if it wasn't always intentional.
Posted by David Griffey at 5:38 PM