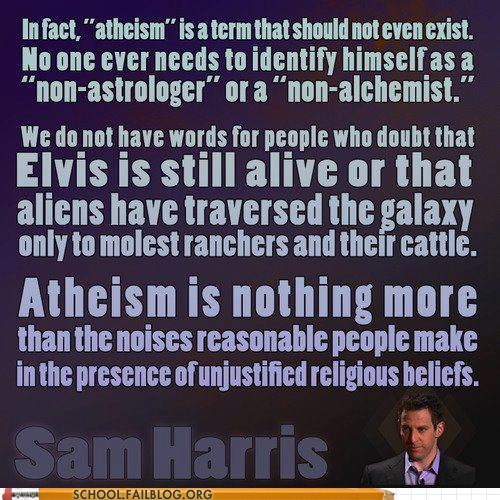 No, we don't have words for people who doubt that Elvis is still alive.  But we sure would have a word for someone who said that Elvis never existed, but was simply a giant conspiracy of music industry insiders in order to bilk teenagers out of their hard earned money.

I know, this is one of those many things that atheists say that makes rational people scratch their heads.  And if I had more time, I could have more fun with it.  But big celebration of our country's birthday coming up, and time being what it is, I have planning and preparations to think about.

So here's my thing.  This whole 'atheism is not anything, it's the absence of all things, the great not-un-thing that means it's true because it's obviously right' argument is, to me, evidence of the desperation of atheism.  In the end, the cocksure belief that atheists of centuries past had, that the new found scientific methods and reliance on mathematical formulas would unlock all knowledge and demonstrate all reality apart from a divine, has more or less washed up on the beach.

In fact, few things bolster religious faith than looking back at what skeptics and secularists in the olden days imagined would deflate reasonable belief in the Almighty, and comparing it to what has happened up to date.  The worst thing is the realization that atheism can't prove anything about God or the absence thereof.  It has been entirely incapable of proving anything about the truth claims of religion.  Science, when properly understood and utilized, has nothing to say.  And as atheists are fond of pointing out, you can't prove a negative.

True.  But what atheists don't want to say, or admit, is that atheism is, in the end, a belief.  A subjective, personal, unverifiable belief.  It has statements of faith that would shame a south Alabama Baptist preacher.  Can science explain the origins of all things?  No.  But atheists are 'sure' it will some day, and will do so without relying on the divine.  Really?  And they 'know' this?  No.  They 'believe' it.  Just the thought that science alone should speak to the question of God's existence is a faith statement: how do they know all that exists is measurable by the scientific method?  How do they know that if a god existed,  it could be revealed through scientific study?  They don't.  They 'believe' it.

The point is, atheism is a subjective religious belief.  It is a belief about the reality of religious belief.  It doesn't exist in a vacuum.  Atheists aren't  idiots unaware of the fact that there's this thing called religion where people believe in God.  Atheists by their own admission have looked at the evidence and concluded that they cannot believe in God or the divine.  They believe that all matter simply is, and came from an origin that simply was.  With no evidence to buttress them, and relying on enough faith to fill a stadium, atheists declare these truths with no more evidence than that which a person of faith can muster, and sometimes not as much.

So in a desperate act of self-deception, atheists are inclined to say things like the above.  It stretches ludicrousness to the extreme.  And most people with the smallest shard of common sense can see such an argument is ludicrous, through they may not be able to pinpoint why.  But it's enough to know that such statements are acts of desperation from people who in all likelihood are smart enough to know the truth, and are hoping (dare I say, praying) that if they repeat such things enough, not only will others actually believe it, but most important of all, the atheists themselves will finally believe it, too.  Which they should be able to do, since so much of what atheists or other secularists bring to the debate is nothing other than belief in the first place.
Posted by David Griffey at 9:11 PM