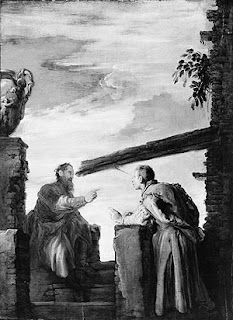 Why he will go down in history as one of our worst presidents.  Not the worst of all time, but one of a string of lousy presidents our country has suffered through in recent decades.  No president is perfect, and there is much partisanship and bias that goes into evaluating them.  And sometimes the flaws of their policies only come out decades later, and I'm not sure how you use changing values and hindsight to judge.  But some presidents were so disastrous that you don't need to wait.  You know.  And Mr. George W. Bush is one who needs no waiting.

Here he is, jumping into the gay marriage debate with all the passion he had following his reelection.  Basically, we know now that catering to the religious right was a tactic encouraged by Karl Rove that included immediately dumping those religious types once reelection was accomplished.  And dump he did.  The fight for traditional marriage was given all the urgency I give to whale gutting in the arctic.  And at the first sign of resistance, Bush dropped it like a hot potato and moved on to more important things.

In this interview, he uses the same biblical passage he used years ago in a Rose Garden press conference.  When pushing for an amendment that would define marriage as between a man and a woman, he quoted Matthew 7.5.  He's not going to judge, the amendment wasn't about judging, it was about establishing a solid moral standard for our society, which society has a right to do.

Now he uses the same passage again, this time as a dodge. What does he think of gay marriage?  Well, don't criticize gay couples, that's what.  Don't take the speck out of someone else's eye without looking at the log in your own.  Notice how he uses the passage in the exact opposite manner.  The first time, back in 2005, it was used to say one could pass laws based on moral standards without being judgmental.  This time, well, let's be honest, he's using it as a dodge. He's all but joining his wife in the pro-gay movement, without actually doing so.  He's using the passage to more or less say to critics of gay marriage 'shut up you hypocrites you', without technically jumping on the pro-gay bandwagon.  Sigh.  And conservatives wonder why many increasingly see being a Christian Republican is getting to be as difficult as baking Kosher ham.

This goes a long way toward showing why Bush was such a disaster as a president.  This is a man without core values, at least in areas that  traditional Christians care about.  Though he is a man who can never be loved by the Left.  This is a man who knows one thing to say, no matter how the context of him saying it has changed.  This explains why he probably imagined we'd stroll into Iraq and be greeted as liberating heroes.  It's what happened in the movies when we liberated France!  And that's what he knew. A man with no real depth to his thinking is not one destined for great leadership.

Of course he's not the only lousy president.  Our current president who has accomplished virtually nothing is well on his way.  The only reason we don't have an outcry is that the media had long ago put a down-payment on Obama's statue on the Mall, and history books declaring him the greatest leader since Moses were already on their way to the warehouses.  So little things like floundering economies and diminishing international standings are just swept away.

The same thing happened with Clinton, whose entire presidency was a mile wide and an inch deep.  Mostly, it was do whatever catered to high poll numbers, and ignore any serious problems until he was out of office and the next poor schmuck got the blame.  Most of the problems of the new millennium were sown or at least nurtured right under his promiscuous protuberance.

In fact, we've had three pretty dismal presidents in a row, each one reelected, for total of 24 years of solid lousy leadership.  By 2016, that will be the last 10% of the country's history under executive train wrecks.  Which probably says something about why we're at the stage we are.  And a big problem for at least a couple of them is demonstrated by this limp-wristed answer by Bush.  An un-answer given by a man with an un-opinion.  Un-principles make for bad leadership and examples.  As our country is quickly discovering, if it already hasn't.
Posted by David Griffey at 2:23 PM