Striking a nerve for the sake of the Good

So I broke my promise and went back to visit Mark Shea's Facebook page.  I know, I know.  I said I wouldn't. What am I, some glutton for punishment?  I didn't comment on anything. I just went to look.  I wanted to see if Mark was continuing with the very problematic practice of having 'Isn't Bernie Sander's the cutest thing?' posts on his very Catholic Facebook page.  The whole thing, and my banishment, came from that.

When CAEI went offline, I decided to take a look at Mark's Facebook Page.  I don't typically do Facebook that much, and I had never visited his page.  I heard horror stories, but found it hard to believe them.  Well, once I was there, I believed them.

By now, of course, Mark falls into that Orthodox Liberal Catholic group.  That is, they don't reject traditional doctrines about God or the Trinity or the Resurrection.  They also stand with the Church on issues like abortion and gay marriage.  But in almost any other area where there is wiggle room, they tend to fall down along the modern, post-Christian liberal paradigm.  The reasons are, no doubt, many.  For some, as my boys pointed out with our parish, it's less that they love liberalism as much as they hate American Conservatism and the GOP.

Be that as it may, today Mark could in no way be called a conservative or traditional Catholic and have those terms mean anything.  And his Facebook page reflected that.  Moreover, those who commented were a rough brood, many of which seemed to be the sort of thing Pope Francis could have been thinking of.  It often got mean and ugly.   Quite a bit of contempt and condescension toward those who aren't following lockstep behind the modern Left.

Nonetheless, for all his Left leaning and liberal cheering, Mark remains adamantly pro-life and passionately against abortion.  Period.  No suggestions otherwise can be entertained.  So it came as quite a shock, in those couple weeks I was visiting there, to see how many 'Bernie Rocks' posts Mark had uploaded.  Especially when it was set in juxtaposition to almost every other candidate Mark mentioned, who received nothing but scorn and insults from Mark and most of his readers.  Like a sore thumb, Sanders stood out above it all and Mark's Facebook page looked like quite the Pro-Sanders Facebook headquarters.

So when Mark posted yet another 'Equestrian Sanders Pic', I merely said that his page was becoming like a campaign stop for the Sanders campaign, and he might want to do a double check.  After all, Sanders goes beyond pro-choice.  He is pro-abortion, and in fact, pro-culture of death.  He is part of that secular liberalism that reminds us how so few societies that have opposed war or the death penalty have done so in the name of life's sanctity.  Just the opposite.  They do it because things like torture, war and the death penalty run afoul of the Left's great sinful promise: that pride is, in fact, a good thing.  The universe does rotate around me.  Things like death penalties or punishment or war suggest there are things bigger than me, and so they are clearly bad.  But things like abortion, any marriage or sex any way I want, euthanasia, assisted suicide: they serve me and a world set firmly under my whims and desires.

That is the sort of Left Sanders advocates.  As a politician, he has gone into areas that even pro-choice politicians fear to tread.  He advocates post-Christian sexuality, and further appears to support the punishment of those who don't do likewise.  He supports gay marriage, and also the HHS mandate, thereby solidifying his opposition to multiple things that Mark holds near and dear.

In some ways, it reminded me of Mark and Ron Paul some years ago.  For a while, Mark became quite the Catholic voice for the Ron Paul campaign.  While he insisted he wouldn't vote for him, that he was merely pointing out where he thought Paul was correct, his blog became a major boost for Ron Paul supporters.  Eventually, Mark did admit that if Paul was in the primaries by the time they came to Washington, Mark would vote for him.  When he did that, it wasn't really a shock.

In some ways, this sudden high-five to Sanders sniffed a bit like the old Paul posts.  Sure, he wasn't saying 'Vote Sanders' or 'I Support Bernie!'  But his posts were stacking up quickly, with many having nothing to do with anything other than "Bernie Sanders: Awesome Guy!"  Sorry, but someone who pushes to loosen the restrictions for a partial birth abortion has dropped at least one rung down the awesome ladder in my book.

So I posted my message.  And oh my, all hell broke loose.  Mark came at me with everything: mocking me, calling me names, accusing me of passive aggressively suggesting he is pro-choice.  He used the old Sea Lion cartoon against me.  Several of his readers did the same.  I tried to keep it where I was, insisting that while you can quote someone you don't agree with (as a general rule I try to find better examples unless I'm making a specific point), there is a logical difference between a single quote and days of 'thumbs up' posts.

Mark and his readers would have none of it.  Mark simply repeated the charges over and over again.  Even my oldest son tried to bring some perspective, echoing a logical assessment of the current political climate being partly to do with Obama's legacy.  That went as well as you can imagine. 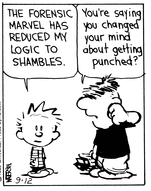 Finally, I had enough.  Especially since Mark continually repeated the charge that I was passive-aggressively insinuating he is pro-choice.  Of all the things I could say about Mark, that would never be one of them.  And I told him that.  But it did no good.  Mark was falsely accusing me of falsely accusing him; like a fundamentalist insisting that Catholics worship Mary no matter how many times we say we don't.  I simply couldn't do anything.  Mark was answering with mockery and accusations and hearing nothing else.  With readers sympathetic to Mark's position, I was outnumbered.

Finally, Mark told me to just leave.  To get the hell off of his page.  At that point, there was little else I could do.  There was no reason to stay.  I might as well have gone to Jack Chick's website and argued for a Dungeons and Dragons tournament in a Catholic Church.  Which is a pity.  Mark Shea, c. 2016 bears almost no resemblance to the Mark Shea I first encountered, c. 2004/2005.

But, never one to cry quits, I just wondered.  I wondered over the weekend.  I wondered if he was still going full steam with the 'Awesome Sanders' posts.  So I snuck over today to grab a peek and, guess what?   From that day, and in fact that post, there have been no Bernie Sanders posts.  There was one blasting Sanders and Clinton for their relationship to Planned Parenthood.  But that was it.

So you see kiddies, sometimes you have to suffer the slings and arrows to help keep someone from going down the dark path, even if their intention is to do no such thing.  Part of me wants to be smug and go there and point it out, but I know better.  That would be wrong anyway, and it could back fire.  For now, be glad that a leading Catholic voice in Apologetics isn't allowing his Facebook page to be a major stopping point for one of the most ardently pro-culture of death politicians in our national government.
Posted by David Griffey at 1:36 PM

Email ThisBlogThis!Share to TwitterShare to FacebookShare to Pinterest
Labels: Catholic Church and the Left, Catholics and the Internet