The name of my pain

Is Protestant Clergy Convert.  I received this little chart in an email the other day: 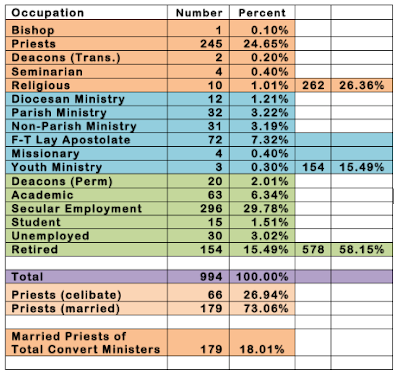 It's from a lay apostolate (that's ministry to you Protestants out there) that focuses on helping folks who convert to Catholicism.   It's main purpose originally was to help Protestant clergy converts.  But over the years that broadened to include an almost equal focus on anyone who becomes Catholic.

A couple things.  The total number of clergy converts is 994.  That doesn't tell me since when.  But let's assume since around the mid-90s, when the apostolate began.  Let's say 20 years.  That's around 49 a year.

It also doesn't say exactly how one defines Protestant Clergy converts.  I know it includes bi-vocational pastors, assistant pastors, seminarians and professors as well as those who are ordained but employed with denominational jobs.  It might even include people ordained who never actually went into ministry.  That happens sometimes.  And that's a big difference.  A person who is a successful lawyer who just happens to be ordained and act as an assistant pastor is not in financial harm's way by converting.  Neither is a professor, who can simply slide over and get a job in a Catholic university (or a secular one as the case may be).  It is not the same for a full time vocational pastor with no other financial resources and no career to lean upon.

Finally, it doesn't tell me when what is happening.  Of those hundreds who became priests, how many did so in the last ten years?  How many in the 90s?  The 00s?  I know for a fact that the numbers in the chart aren't too far off from where they were a few years ago when I saw similar numbers of clergy converts.  Have the numbers diminished?  How many have joined in recent years versus, say, 96 - 06?

I'm in that 3% unemployed BTW.  I have it on good authority that the main reason for my plight is that our bishop is no particular fan of letting ministry converts get a job.  The reasons are a bit murky, but the best I have been able to piece together is that he feels somehow that it might appear that the Church is 'bribing' clergy to convert.  Well, if that is the reason, he can point to me and show that's not true.

But that is a major problem.  Added to Pope Francis's own statements that seem to suggest that Protestants can get to God their way, the idea of 'Clergy Converts Hurray!' just seems to be fading.  It already seemed to be waning under Pope Benedict XVI, who also spent far less time focused on our 'Separated Brethren' than his predecessor.

And it's not just me.  I've talked to a few others who are recent clergy converts and basically have asked 'where's the party'?  If there was a time when the Church doors swung wide, and dioceses and parishes bent over to accommodate the particular hardships that clergy experience when converting, that time appears to have passed.  In my diocese, in fact, I've been told by no less than two priests and a deacon that a blank resume with nothing on it that doesn't include 'former Protestant Clergy' would be much preferred over any resume that included 'former Protestant Clergy.'

That alone has been a major source of our trials, and has put our family to the test.  Exactly how that test plays out remains to be seen.  But I had to think on that as I looked at this chart, pondered the questions that immediately arose, and set it in light of our own experience.  For what it's worth, the email mentioned others who have gone through our trials and tribulations, and have been "disturbed and discouraged by what they experienced and how they were treated after their conversions."  Again, I just wonder exactly when they came  in, and if there might be a chronological trend.
Posted by David Griffey at 10:36 AM