A tale told by an idiot

John C. Wright takes on the story of the Danish girl being prosecuted for pepper spraying a would be rapist.  No, he's not the idiot.  He actually gives a lucid appraisal of the lies and stupidity of the Left that has brought about this little scandal.

In truth, I saw this story a day or so ago when it was sent to me by one of my readers.  I started to comment, then paused.  If I looked at the story in isolation, I would say it is grounds for reexamining the Danish laws.  Apparently, she did break the law.  The law says civilians can't have pepper spray and she had it.  Whether that is a good law or not would be the debate.  I would suggest that, given the climate in Europe right now, that might be a law that needs reworked.

That is where I would have left it.  Had it been an isolated incident.  But you just can't help but get the feeling something bigger is afoot.  Mr. Wright actually seems more sympathetic than I am, though I might be misrepresenting his piece.

For me, it's not just stupidity and unreason that has brought us to this point. It is the deliberate overthrow of the civilization that Christianity built.  It is nothing short of a global revolution.  A New Order.  A New Way.  We call it, in desperate want of a better term, the Left, Liberalism, Progressivism.  But it is really none of these things.  It is a new, revolutionary World View.  It has morals.  Theology.  Philosophy.  Ethics.  And it has every intention of dominating the world and mandating conversion and obedience to those same ideals and beliefs. 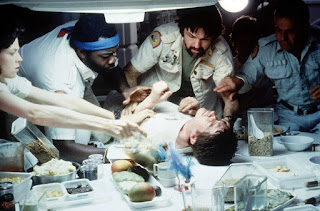 Like most Enlightenment Era revolutions, however, it is more lies and evil than good.  Not that all it clings to is an evil.  It has seized and monopolized the discourse regarding equality, concern for the poor, peace making, and liberty.  All good things.  But like creature in Alien, it is merely using these things as a parasite, gestating inside the civilization in which it was conceived, and soon to explode from its host's guts and leave the host dead and rotting on the dining table.

Of course hedonism, narcissism and ignorance have been its thrice-unholy methods for advancement.  While touting education and learning, it seems to breath the air of stupidity and disinformation as a matter of survival.  Thus it was that Multi-Cultural education was born.  The whole movement suggested that we Westerners simply didn't know anything about other cultures.  We didn't care.  And to a point, that's probably right.  Most people getting by in life probably weren't too worried about other cultures.  Many probably didn't care much about their own.  And education is always a good thing.  We can always learn more.

But that's not what Multi-Cultural Education was.  It was a deliberate means of propaganda.  Its purpose was to teach against the Christian tradition.  Teach against the civilization and societies that Christianity helped create.  To do this, MCE (that's Multi-Cultural Education) laid a brilliant template that was lethal for the West, and unbeatable if you accepted its premise.  That is, we could not judge the other cultures we studied.  Like a moral version of the Prime Directive, we're not to go in and meddle about and say they were evil or bad.  That's ethnocentric.  That's racist.  That's xenophobia to the max.  We look on other cultures and their past like a scientist examining a rock.  Nothing more.

Ah, but when it came to studying the West?  Why, that's when the moral outrage was unleashed.  That's when we were reminded of the horror, the evil, the indefensible bigotry, hate, ignorance and superstition.  We condescendingly judged the West with no mercy.  We judged it with really no way of explaining when and how the West could be redeemed (apart from washing itself in the baptism of this new religion).

But here was the brilliant sleight of hand.  Because we judged the West as opposed to others, does that mean we're saying the West should be held to a higher standard?  Dare I say, the West is therefore somehow superior to the Huns, and Mongols, and the Indus Valley, and Aztecs, and Polynesians, and the Buddhists and the Hindus and the Muslims and everyone else?  That's why the higher standard?

Me genoito!  That's old Greek for May it never be!  Or even, Hell no!  To say that is, again, to show our ethnocentric xenophobic racist superiority!  What are we, a bunch of Nazi Master Race types?  We are no better than those other cultures, religions and civilizations.  Heck, as MCE progressed, it almost came to be that the West was in every way inferior to all those other cultures.  Those cultures turned out to be dreams of the modern Left.  LGBTQRSTUV rights, women's rights, religious tolerance, ecofriendly cultures - why the list goes on and on.  And it doesn't matter what civilization we're talking about.  Watch any pop-history show on PBS, National Geographic or - heh - the History Channel.  Take a history book off the shelf at a Barnes and Noble.  It doesn't matter.  The Huns, the Mongols, the Vikings; sure they did bad things, but let's look at how awesome they were in other things.  Far better in most cases than the West and its evil, worthless ways.

That was the trap.  The West is inferior to every other culture in almost every way, and yet we can only trash and hash it and it alone by the standards it supposedly pioneered.  All other cultures, that are mostly awesome anyway, are not to be judged.  And when there was an evil done, or other cultures did evil to the West in a way that couldn't be ignored?  Why, just as Terry Jones put it in his unintentionally hilarious miniseries on the Crusades, it's because the West had it coming.  If Muslims slaughtered Christians, the Christians deserved it.  And that goes for every other European Christian killed by other non-European, non-Christian types. Including 9/11.  We might have not joined Ward Churchill and hailed the death of thousands of little Eichmanns.  But we accepted the premise that 9/11 was, in the end, our fault.

So we have that little lie that was, in my opinion, deliberately hoisted upon the unsuspecting West.  An intellectual parasite that is eating away at the very culture in which it was conceived.  And now, we are to it.  Because one thing that happens when you lie is, you have to keep lying.  When you build your revolution on a lie, bet your bottom dollar that crazy, and likely evil, things will start happening as the lies are gradually revealed.

Since our Founding Fathers didn't do that, but actually fought a revolution for principles they intended to follow, however imperfectly, we sometimes lose sight of that.  Most revolutions don't do that.  Most revolutionaries aren't so principled.  And so we might miss that this revolution, which assumes the evil of the Christian West above all things, and all suffering and problems in the world the result of the West and its bastard child The United States, is running into a problem.

That problem is Islam and Islamic terrorists.  Try as the Left might to insist it's still the West's or America's fault, the terrorists just seem to find ways of tearing down the wall of ignorance.  It's almost as if ISIS wants to say 'Hey!  You!  We're evil on our own!  It isn't your fault!  We're just smack down evil, so deal with it!'  And in the face of this, the Left quakes.  To think another culture, another religion, another civilization could produce plain evil without somehow blaming the West is anathema to the MCE template.  Why, that could make thinking people pause and start reexamining some of the other assumptions of the Left that are based on that simple teaching.

So even though this story of the Danish girl might just be cause for reexamining the laws at hand, you can't help but feel the overall context of it suggests something more.  Even as this revolution makes headway it couldn't have imagined only ten years ago, and scores victory after victory in the courts of America and the World, you get the feeling something is amiss.  The focus on this girl as opposed to the criminals.  The reaction to those Oregon protesters compared to the reactions to the ISIS militants of San Bernardino.  The imprisonment of Kim Davis.  Something is going wrong in the narrative, in this idiot's tale,  and it's as if there is a scramble now, a mad dash to keep things in line in the hopes that a generation drunk on sex, drugs and the latest app will miss it until it's too late.

"In the fastness of His own realm He sought the secrecy of night, fearing the winds of the world that had turned against Him, tearing aside His veils ..."   The Return of the King
Posted by David Griffey at 10:52 AM