So I saw The Revenant 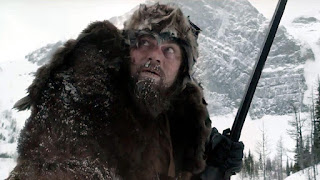 Speaking of the Dying West.  I went to see it on the big screen on a rare date night courtesy of our boys.  My wife and I settled into the multiplex, with a tub of popcorn that, if it had water instead of popcorn, could have sported a diving board, and watched to see what the hype was all about.

For me, what it lacked in depth it made up for in animal guts.  Basically it was 'see what you have to do to survive in the wilderness using realistic gore' mixed with a little tale of vengeance tossed into the mix.  Well, a lot of vengeance.  That's what the story is all about.  Leonardo DiCaprio is defying death in order to hunt down those who did him dirty and left him to die.

It's basically Dances With Wolves meets Gladiator, with Tom Hardy's Fitzgerald channeling Sgt. Barnes from Platoon.  As one fellow said as we left the movie theater, they just don't have original ideas anymore.  And they don't it would seem.  There were few scenes where, as they were being set up, I couldn't guess what was going to happen next.  A couple, like the bear attack, I knew from the commercials. But many I could guess because, well, I've seen them a thousand times.

Don't get me wrong.  Leonardo and Hardy, and most of the cast FWIW, did a splendid job.  I was particularly taken by DiCaprio's performance.  He really did melt into the part.  And the scenery?  Woof.  I have this sudden urge to sell everything and move to Montana.  It was real scenery, too.  No CGI.  Though there were a few scenes that were spliced with scenery from other areas of the world to give it umph.  As if the Canadian Rockies aren't enough.

But creative or original?  No.  Not really.  Early on, apart from a few minor details I more or less figured out what was going to happen and how it was going to go down.  The first part was a bit confusing.  It took me about a half hour into it to figure out who was who.  But past that, yeah, pretty much been there, done that.  Some of it seemed as though a longer cut of the film had to be whittled down, because in a couple cases, there were scenes that more or less left you hanging or wondering what happened or how did these people get over there.

But it's big, it's sweeping, it's DiCaprio eating animal guts with a scruffy beard, so it should do well at the Oscars.  Especially because it takes as almost axiomatic an important concept that underlies what I've been posting about today: The Americans?  They're the baddies.

Remember Dances With Wolves?  That was quite a stunner back in the day.  Not that Hollywood hadn't already been exploring the idea that Indians may have been the awesome ones after all. 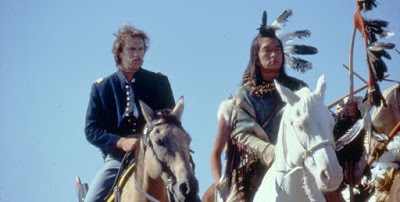 But DWW did so with so much aplomb, it was so brazen, that many took notice.  I mean, except for Costner, was there any American who wasn't a boorish, crude, rude, evil, murderous barbarian with stringy hair and bad teeth*?  By comparison, the Indians looked like they had been given a six month membership to a fitness center and a Hollywood makeover spa.  The fact that the Indian culture was all but worshipped, and the Americans portrayed worse than Indians in a 1930s John Ford movie, was quite a shock in the day.

But today, by the time of The Revenant, it's simply the case.  It's assumed.  It's not even a big deal.  The assumption is that America was a racist, slave owning, imperialist, genocidal nation akin to the Nazis more than a freedom loving Enlightenment experiment.  We're the bad guys.  The settlers are not heroes.  They're the bad guys.  It's a fact.  It's not even focused on at this point.  True, in the movie, the Indians actually come off as rather two dimensional.  They ride about, killing any white man who gets in their way, leaning on the 'you did it to us, so we're going to do it to you' reasoning of Sonny Corleone.  But they are more noble, and in no way inferior to the settlers and trappers who, almost to a man, make the English in Braveheart seem kind and thoughtful by comparison.

I think of that, and I think of an observation my son made when we went back to Williamsburg a year or so ago.  We had visited Williamsburg a couple times way back in the late 90s and 01.  We loved it.  But owing to life and finances, it had been a while, and we promised our oldest we would go back before he graduated.  So we went.  Talk about changes.  I won't go into all of them.  But one of the things we noticed was how much of the historical reenactments now were centered around slavery and sexism and persecution.  They were there when we first visited, but now they seemed the focus. The emphasis was on slavery, slavery, persecution of Indians, slavery, sexism, slavery.  My son quipped, after going through a house in which all that was talked about was slavery, rather than the actual house, that he wondered how they had time to fight a revolution, what with all the time it took to beat salves, oppress women, and kill Indians.

I've often said that Western Civilization will be the first civilization in history to die from suicide; suicide brought about by disproportionate levels of guilt and irredeemable regret over its selective past.

*It's worth noting a couple things about DWW.  First, not all Indians (like descendants of the Pawnee) were thrilled with the God-like portrayal of the Sioux nation.  Many came out and said that to them, the Sioux were every bit as militaristic and imperialist as the Americans.  Also, the Extended Cut that was shown in Europe actually had a couple deleted scenes that showed the Indians in a darker light, and actually had a non-Keven Costner American come off as not evil.  That was the Lieutenant Elgin, the commander who captures Costner at the end of the film.  True, he muses about how awesome the Indians are and how it would be nice to live with them (being a proud American does not make one a good guy in that film).  But at least he's not entirely evil while simultaneously being not Kevin Costner.
Posted by David Griffey at 11:37 AM