Because Jesus says so 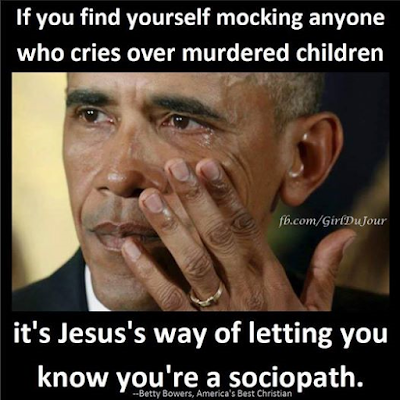 Yep, there is no other choice but that Obama was sincere.  Maybe he was.  I don't know. I remember when Bill Clinton got all teary eyed, and when John Boehner did the same, and both were mocked in turn.  In this case, I don't see a man who is faking tears as much as I see a man who is deliberately belligerent in dealing with his political opponents, who then uses their obvious frustration with being treated the way he treats them in order to justify dodging those pesky Constitutional processes.  Knowing, of course, that the media narrative will back him all the way.

Maybe he did get sincerely teared up when he thought about those slain children.  I know I do.  If he acted like he was willing to look at more than just guns! Guns! GUNS! (and now mental health) as the problem, then I might be more sympathetic to his pain.  After all, if you really want to solve the problem, you'll be honest about the whole problem, not just the parts of the problem that support your agendas.

I say the same to those who are so casually invoking the eternal mind of the Thrice-Holy God with this little graphic in order to score the same cheap points they so flippantly condemn.
Posted by David Griffey at 6:44 PM

Email ThisBlogThis!Share to TwitterShare to FacebookShare to Pinterest
Labels: Catholics and the Internet, Social Observations