How not to be a pro life Catholic

Or so I was told back when Osama Bin Laden was killed. Turns out, we were told by the best internet authorities, anyone who does anything other than pray for the soul of the deceased is a partisan hack who cares less for Holy Mother Church and its teaching on the Sanctity of life than their wretched political ideologies.

OK, fair enough.  Christians should shoot higher.  Got it.  But then, having drawn the line in the sand between disgraces to the Catholic Faith and us awesome examples of Catholic purity, it is doubly unseemly to go a step further and not cheer the death of someone, but instead exploit that death to ramrod your agendas and build on your contempt for others. Thus: 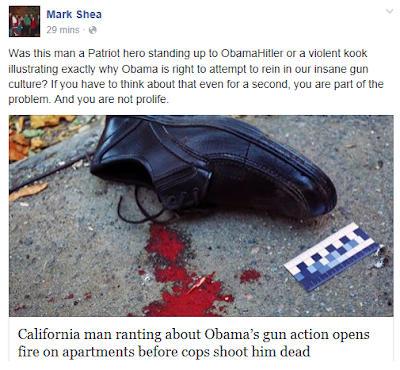 The link to Mark's Facebook page is here.  The article from the always credible RawStory is here.  Again, if you throw around 'not authentically pro-life' like so many nickles and dimes in order to beat down anyone who disagrees with you, at least have the common decency to live by the same standards.
Posted by David Griffey at 3:21 PM