And a happy Halloween it was 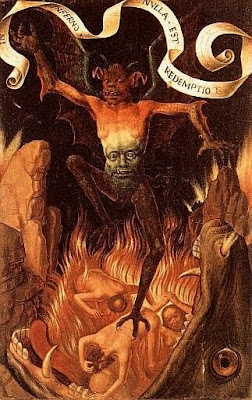 In some Christian circles, whether or not to celebrate Halloween is a pretty hot topic. Satan's Christmas!, I've heard some folks call it. Needless to say, in my own former Protestant culture, alternatives were looked for and found in Harvest Fests, or Hell Houses, or anything that borrowed liberally from Halloween without the need for invoking witches, ghosts, devils, or anything supposedly hellish.
But that always struck me as a bit odd. After all, what is Christianity but a resounding affirmation of the supernatural in an otherwise secular and materialist world? At a time when so many people watch the stock tickers, or worry about the next IPad upgrade, or think about how to connect every digital form of entertainment in the house, Christianity dares to say 'there's more out there!' Celebrating Halloween without the ghosts is like drinking alcohol free whiskey. What's the point?
The fact is, as I mentioned a few days ago, we could spend hours on where Halloween came from. We could argue its pagan origins, or its Catholic roots. Truth be told, like most things, there's probably a little bit of truth to both. Skeptics and Protestants who still maintain a healthy grudge against the Catholic Church will prefer to focus on the pagan origins of the holiday. Catholics, and especially that exclusive breed of Catholic apologists, will likely turn to the Catholic foundations of the celebration. In any event, it's history is not what I want to think about.
What I want to focus on (apart from the total fun the holiday can be), is the supernatural beckoning of the event. Somehow, in some way, we all have that little tug in us that suggests there is more to heaven and earth than is dreamt of in our philosophies. In my agnostic days, toward the end of college, I became restless with my self proclaimed agnosticism. I wavered. I began to ask questions about God. How could we even come up with the concept of God in the first place? We assume that we could, because we have something known as religion. But where did it come from? The old tales that a bunch of cavemen just made the whole thing up make for great reading in your standard introduction to anthropology text. But we just don't know. We have no record of Throg, the first caveman to put forth the hypothesis of a supreme being. The idea that it was made up, I realized, was simply a factor of belief; a belief that there is really nothing to any religion at all. A belief that could not be proven any easier than the belief in a personal God.
While reflecting on this, and getting the queasy feeling that I was starting to sound too religious, I decided only atheism was safe, and valid. Agnostics, I concluded, were folks who wanted to have their cake and eat it. They wanted to dismiss any real anchor in religious thought, being free to make up their own moral universes, while keeping a couple toes dipped in the shallows of religion - just in case. Hence the tendency to start entertaining religious thoughts at the first sight of a quandary. Atheists, on the other hand, were pure, brave, courageous. No vision of a wrathful God consigning their souls to an eternity of damnation bothered them. They took a stand and said there was nothing, no God, no spirit, no supernatural, no miracles, nothing. True, naturalist, atheist, materialist - that was where the respect was. That was secularism in its purist form.
The problem was, I didn't believe it. Beyond some questions about the sources and consistency of moral beliefs I ran into, I just didn't believe that the universe was all atoms and molecules and quasars. I had some deep down gut feeling that there was something more. Beyond this thin, gray veil was something else, something beyond the limits of our five senses.
And oddly enough, one of the things that brought this feeling to the forefront of my thinking was the simple belief that good was as real and potent a force as evil. That there was real good, real evil, and real domains in which these forces held sway. It wasn't hard to look at the 20th century and believe in real evil. What surprised me was the number of people who, as the century wound down, came to believe that evil was not really a force at all. Everything was psychological, social, environmental. True evil was simply one more fairy tale to be discarded along with leprechauns and unicorns.
And yet, I didn't believe that. I thought about evil. I thought about its causes. Without ever reading Paul's insistence that we fight against the principalities and powers of this present darkness, I had a gut feeling that there was true evil behind it all, working against whatever power of good existed in the universe.
So when I came into the Church, by way of my Protestant brethren, I was surprised that this holiday that focused on the darker side of the world was shunned. I could understand, perhaps, the argument that children dressing as a devil or ghost might trivialize the power of Satan. But I couldn't understand why every vestige of the hellish side of the day was removed. For Halloween has a way of reminding us, however superficially, that there is something beyond. There is a power beyond what we see. There is a source of that power. And more disconcerting than anything, especially for a struggling agnostic, there may be a destination that awaits those who flirt with those powers of darkness. And what better way to celebrate our salvation, I thought, than to acknowledge, even in festive form, the never ending darkness that awaits those who refuse the grace of God, the source of every good and perfect thing? Especially for those of us who have accepted this gift of gifts.
Posted by David Griffey at 10:57 AM