How Spies Like Us became an annual December ritual 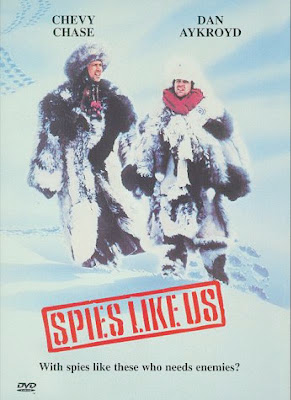 Funny how sometimes we just do things because they evoke some memory of the past.  My own experience is that if you try to reproduce a splendid time you had on vacation, or a cruise, or a concert, or anything, it isn't so easy to do.  Go back in a couple years and you might have fun, but you'll probably never reproduce the 'magic' of that first time you went here or did that there.  Yet there are some things I find myself doing every year simply because they're part of my collective memories.  Many of them have developed since I was married, and others since we've had kids.  Some of them have been adjusted to the new demands on time that jobs and growing kids can place upon our schedules.  But some of them manage to find their way on my yearly calendar, if for no other reason than I've always done it.

Take my annual viewing of the 1985 comedy Spies Like Us.  There's not really anything special about the movie.  It's OK.  Some of its humor is there, some of it more or less has gone the way of parachute pants.  Truth be told, I don't particularly like the movie that much.  The first and only parring of Chevy Chase and Dan Aykroyd seemed as much miss as hit.  Yet since the advent of DVDs and its full screen release, I bought it and have watched it every year in the first week of December.

Why?  Because I first saw it in the first week of December in 1985, toward the end of my freshman autumn quarter at Ohio State.  School wasn't out yet, but a few friends who lived on campus began filtering back home on weekends.  I stayed at home and commuted to a local branch of OSU for the first two years, so I was already milling about, waiting for my former classmates to return with their stories of college life.  The first week of exams was over and since he was done, one of my best friends from childhood, named Kelly, came back that weekend.  As usual, I had exams until the last day of the quarter.  Nevertheless, he was home, our first foray into college life was coming to it seasonal conclusion, and I was anxious to do something with my old buddy.

That Friday night, after stopping by the home of our karate instructor Dale Beam (having moved to Columbus, Kelly had stopped his lessons, but I was still involved), we went to nearby Marion, Ohio to see a movie in the Southland Mall movie theatre.  The movie we picked was Spies Like Us.

Apart from remembering the scene in which Bob Hope makes a cameo, and otherwise thinking it was pretty stupid, I don't remember much of the movie.  Nor do I remember much from the rest of the evening.  I don't remember what we said at the Beam's home, nor do I remember anything else.  Yet for some reason, I've always made sure I watch Spies Like Us sometime around the first of December.  I lift a cold one, kick back, and let the general flavor of that Reagan era, late Cold War comedy lift me up and take me back to pleasant memories.  Even if I can't remember what they were, something inside me says they were happy times.

Perhaps it's because I'm not trying to reproduce an entire event, or trip, or vacation, the annual ritual works.  There are other things I remember from that Christmas breaks way back when.  There are other memories, particularly from fall and winter, Christmas and December, that flood my mind at different times and in different circumstances.  There are other movies, various songs, smells, weather, sunsets, games and school specials that may ring a bell.  But for some odd reason, watching a movie I don't particularly care for at a given time each year brings back a flood of memories and a chance to remember life from a simpler time.

There's not really a spiritual application here, though I'm sure more clever writers could get one out of it.  Nor is there a link to some story in the news or some crisis in the Middle East, or an attempt to say how ignorant we were of areas like Pakistan in 1985.  It's just something I was thinking about while looking through our DVD case to find the movie.  It's what makes us people, I suppose, and I'll bet I'm not the only one who has those strange, quirky things that when done every so often, bring back memories of people gone on their own ways, times long past, and a hint of yearning for a time that nostalgia alone can satisfy.  So here's to us Kelly, hope life is treating you well, wherever you are.  I'll think of all those times we had in a few evenings when I sit down and watch this stupid comedy from another world, and another time, all those years ago.
Posted by David Griffey at 7:00 AM