In celebration of the great media frenzy that will soon pass like a breeze in the night, I thought I would post this little picture.  It is of my oldest son a few years ago on his Christmas present.  At that time, he became interested in Harry Potter largely because everyone said he bore a striking resemblance to the boy wizard.  Some even said he looked more like what they thought Harry Potter should look like than Daniel Radcliffe.  We would see people stare, kids come up to him, people even stopped us in restaurants.  When we attended the - then - last book release midnight party at Barnes and Noble, parents actually asked if they could take their childrens' pictures with him.  Being a bit on the shy side, he agreed to the requests only due to our prodding.  But truth be told, I think he eventually warmed up to it all.  It did get him into reading the books and, along with other literature, helped open up his love for reading and writing.  So all in all, a fair and pleasant time of memories in our lives.  BTW, the glasses were really his. 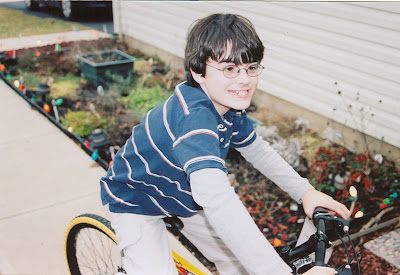 Posted by David Griffey at 9:41 AM