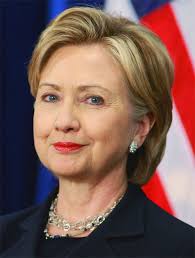 First, she won where the money is, according to her.  And we all learned in the 90s that it's the economy stupid.  Who cares about things like morals, character, values, truth, honesty, women, right, wrong and all that gibberish?  So said her husband's defenders as she looked on.

Then she continues to remind us that those who voted for Trump were racists and sexist (with a strange tie to Red State talk).  Duh.  I mean, when was the last time you heard someone on the Left describe non-Leftists as anything other than racists or sexists?  But women sexists?  Well, they're just a bunch of beat wives letting their misogynist husbands call the shots.

Really.  Go to the link at The American Catholic and watch in stunned silence as a woman who was within hours of the White House shows this much contempt and loathing for what could be over 50% of Americans.

Liberals hate non-liberals with a scorn not seen in recent memory.  They despise them.  With post-modern liberalism, there is nobody else in the world worth hating but our neighbors and our families down the street.   I have had every reason to believe that Hillary would have continued Obama's push to make it illegal not to be liberal.  Her scorn and loathing of those who dared blaspheme her entitled victory does nothing other than convince me I'm right.

You'll notice that, during the 2016 campaign, Trump never attacked American 'groups' or Americans in general.  He attacked individuals, and almost always after they first attacked him (Megyn Kelly) or his supporters (John McCain).  He did make broad swipes against non-Americans, primarily Muslim terrorists and immigrants from Mexico.  But he never attacked American groups.  Hillary, of course, did.  She attacked Americans ruthlessly.  At one point she called close to half of her opposing party a bunch of racists, sexists, bigots and irredeemable deplorables.  Her belief that the proper response to Trump's attacks on immigrants was an even worse attack on American voters shows how sheltered in her own little bubble she actually was.

I will never be thrilled that Trump is our president.  I wish more than anything it would have been someone else.  But I'm thankful every day that this woman, who wears her contempt and hatred of people like me as a badge of honor before the people of the world, lost.  And most importantly, I'm thankful because she is not alone in that hatred, and would only have been supported by others in high places who share in her disgust toward people who think our secularist, Marxist nation of narcissism, hedonism, debauchery and death in service to our libidos lacks some good points that previous generations understood.
Posted by David Griffey at 8:00 AM

Email ThisBlogThis!Share to TwitterShare to FacebookShare to Pinterest
Labels: Humor, Liberal "Tolerance", Politics, Stupid is as Stupid is