On behalf of International Women's Day, allow me to celebrate my four sons

It's been a bit since I posted anything about the family.  I got away from it during my time at Patheos.  Not that I thought people there would be mean or anything.  In fact, in a little reminder that we're more human than the internet encourages, when my Mom suffered a bad health scare last year, I was touched by how so many who spent most of their time trashing me stopped to wish her and us the best.

I just didn't do it because that wasn't what Patheos wanted me for, and I tried to do my part.  It was when Patheos wasn't doing its part as I saw it that I left.  So since it is a day to celebrate women, who are increasingly overtaking men on almost every front, while men are told the entire history of humanity was just patriarchal, sexist bilge, I thought I'd bring everyone up to date with my boys.

I have four of them, the oldest 22 and the youngest 8, with 19 and 17 rounding out the other twos' ages.  The two oldest have moved onto college, as I said here.  The third is wrapping up his senior year, while our youngest is in some broad area between third and fourth grade, depending on the subject.  Oh, and we homeschool.

Anyway, for our 25th wedding anniversary, our oldest boys decided to pull from their college savings accounts they have worked years to amass, and send my wife and I on a little second honeymoon.  They had planned on giving us a train trip out West, but then the series of train crashes that made the news got them to think better of it.  Instead they sent us to a hotel built by a military vet who had fallen in love with castles while he was stationed in Europe.  Having prospered in life, he decided to build himself a castle here at home.  His wife, however, suggested he make it so others could enjoy it, rather than keeping it for himself.  So a hotel in a faux European castle design was born.

Normally it would be out of our price range in any event, but our boys went all out and paid for the best suite in the hotel.  All days and nights, plus dinners and special amenities, paid for by their generosity.  As they said, it was in thanks for all we've done for them.  When I look at our run down hobbit hole, cars held together with tape and the fact that they have to work to put themselves through college, I often wonder just what it was we gave them.  Never one to look a gift horse, however, we accepted their generosity graciously, and it was everything a 25th Anniversary present could be.

Here are a few pics of where we stayed:

And here are the boys who made it possible, in a recent picture where the oldest ones came around to help their youngest brother build an all important snow fort (using recycle bins).  For years it hadn't snowed enough to do anything like that with him, so they thought it was unfair their youngest didn't have the chance to build a good old snow fort with his brothers while they were still in school.  I have no clue what it is they are all looking at, but it was something that captivated them: 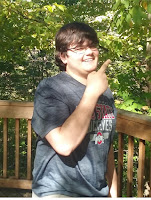 As for who and where they are?  I don't mention proper names on the net, just because.  But as of now, from L to R in the above pic, our third oldest is looking at entering law enforcement when he is done with school.  Or at least starting the process.  Our former gymnast and football star, he's the biggest of the four in everything: size, strength and the biggest heart with a AAA cubed personality.  Not the least intimidated by people, he will wade boisterously into any situation to help friend and stranger alike.  He wanted something that would play to those strengths, and over time began casting his eyes toward being a police officer.  He had thought of going by way of the military first, but recent developments in the news caused him to rethink that approach.  Must admit there is a little love/hate on our part for such a career choice, but we're still proud. 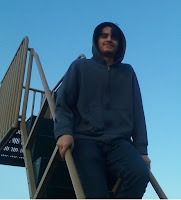 Our second oldest is aiming at law school.  Understated but quick witted, and at times a bit inscrutable, he's the natural scholar of the four with an inflamed sense of justice.  He wants to be a defense lawyer.  Even in elementary school we received calls from counselors who informed us that, when push came to shove, he was willing to stand his ground, whether defending a girl from bullies or calling out a teacher who told kids that the best way to avoid being bullied was to conform.  Even then he could have his way in an argument due to his quick thinking.  He's also a natural writer, far better than his old man, and thus far has climbed the corporate ladder faster than the other two.

Our youngest just comes along, learning from and combining traits of his older brothers, who have given more to him than almost any siblings I've ever seen with that age difference.  He didn't have money for our anniversary vacation, so he said he'd just pay us with hugs.  Being homeschooled, he already gets differences between Aristotle and Plato, the importance of 1066, Pierre's story arc in War and Peace and is pushing past fourth grade math halfway through third grade.  As of now he wants to 'build for a living', but that could change a thousand times.  As we've learned from the others, we're happy to keep him young as long as he sees fit.

Finally, our oldest is studying to be a gourmet chef.  Quiet, reserved, thoughtful and creative, he dabbled with journalism and even law, but his shy and reserved ways just pushed him away, until he settled on the one thing he has loved since he was his youngest brother's age, and that's cooking. Verging on obsessive at times, once he zeroes in on something he typically becomes among the best, whether running, music, cooking, or his encyclopedic knowledge of politics and sports.  So as a chef, he's already good.  Very, very good.  Which is why we get things like this for our birthday and anniversary respectfully:


In both cases, it was his first attempt at those dishes (except the steaks, which he has down to an art and can cook them so as to be cut by a spoon).  Gourmet cooking is a nice college major that starts paying back in dividends early, let me tell you.

So there you have it: the Boys.  I think had God given me nothing but them, I'd reckon myself the richest man alive.  Added to the chance to help pay back my own Mom for her years of love by being her caregiver, and having the world's cutest wife:

I'd say life has treated me, overall, pretty nicely.  Thanks God, even if I sometimes forget that little but obvious fact.

Posted by David Griffey at 4:57 PM