For fear of little men

Up the airy mountain,
Down the rushy glen,
We daren’t go a-hunting
For fear of little men;

The Faeries,
by William Allingham

Mr. Wright gives credence to the possibility that the fellow is on the up and up.  And as I've said before, I'm the first to concede the existence of what people refer to as The Supernatural.   As the good visitor at that post demonstrated, we have people who have turned skepticism into its own blind faith, willing to grasp at anything - no matter how far fetched or demonstrably false - to avoid the easier solution that rests on there being more things in heaven and earth than are dreamt of in our latest philosophies.

I do have a hard time jumping anywhere too traditional in terms of superstitions and little people.  I'll concede the probability of the nether regions, but not imagine them in cultural terms.  That something could be there that stands outside of science's rather narrow corridors is something I can believe.  Adding the terminology, born of culture and history of that particular society, is - to me at least  - just the trappings that try to make sense of that which stands beyond our five senses.

Nonetheless, with that said, I'll take the possibility of seeing the world through created eyes, rather than material ones.  I think the Church has conceded too much to the non-believer over the years.  In some ways, listening to religious scientists and even religious leaders speak of the universe and life and humanity is barely different than listening to an atheist speak of the same.  We just smack a God stamp on it and try to make it all religious. 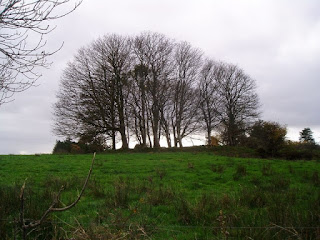 Christianity believes in creation, not a universe.  We don't see it as 'Big Bang, evolution, monkeys and humans and, oh yeah, God made it happen.'  We see the 'universe' as a mere part of Creation, a creation that includes many things beyond the ken of the physical sciences.  To believe in the supernatural is not to accept a material model of the universe and then proclaim 'Sure, there are demons and spirits.'  It is to say the demons, spirits, angels, heaven and hell are the real parts of creation, with the atoms and molecules and cells that make up what we see being merely one part of that grander Creation that groans along with us for Christ.

This isn't to say religious leaders and scientists don't think the same thing.  I just believe that when we hit the stage to discuss our model of Creation, we begin using the terms, assumptions and premises of the secular model of the universe, and sometimes I think that ends up being a tough sell for the post-modern ear.

Because of that, even if I don't envision little men guarding their fairy forts, I much prefer a model that allows for that possibility than one that dismisses almost all such possibilities but tries to maintain the thought that God is still there and, oh yeah, Jesus rose from the dead.  After all, an empty tomb is easier to swallow when set next to a fairy fort than set next to molecules or cells under a microscope.  One seems to reduce Creation to nothing but the materials of the universe, one says everything science imagines about the universe is but a small part of Creation.
Posted by David Griffey at 10:00 AM