I am in awe of Arnaud Beltrame 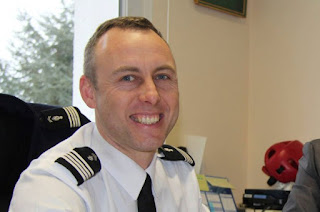 And sadly, he has passed away.  Col. Arnaud Beltrame broke from our modern trends and sacrificed himself for those he never knew.  As an ISIS soldier attempted to keep the slaughter alive by taking hostages in a neighborhood store, Col. Beltrame and the French police surrounded the location and began working to keep the hostages alive.  Eventually, Col. Beltrame offered to trade himself in for a hostage, and went into the jaws of death that others might live.

Leaving his phone on so that the police could track the ISIS terrorist, the resulting firefight unfortunately included Col Beltrame receiving fatal wounds.  He passed away this morning.  God bless that hero and his family who gave the last full measure.

As we watch forces dedicated to oppression and control exploit youth willing to march for the proposition that it's time for others to sacrifice so I can be safe, Col. Beltrame lives as a stark reminder of what kind of attitudes we seem to be working so hard to eliminate.  He didn't ask that others give what they can so he could remain safe.  He sacrificed everything so that others would have more days and years in which to live.

You choose.  Which would you prefer?  A world in which Col. Beltrame represents the basic philosophies of the day, or one in which a generation is taught that it's not what we can do for others we should be asking, but how much others must surrender so that we can have what we want out of life?  I know I have my answer.  And I'm thankful that one of my sons, looking past his peers' aligning with the majority marching today against others' rights, has chosen to follow the same path  as Col. Beltrame so that someday he might be able to help - others.

Greater love hath no man than this, that a man lay down his life for his friends. John 15.13
Posted by David Griffey at 3:00 PM