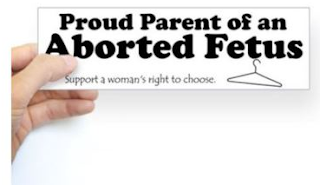 About the growing and expanding Culture of Death.  Mark writes a post that more or less says the American Right is hellborn Satanic racist Nazi to the core - but we're still called to love their miserable, evil, racist, deplorable souls.

Fair enough.  The Right, like anything involving people, has its bad elements and, being a human invention, its errors. There is a radical Right, a racist Right, an alt-Right, and all manner of evil to be found on the Right.  Smart people with more than two brain cells know it.  Likewise there is also a radical Left, an alt-Left, a movement filled with all the same loathing, hate, demonic, slaughter, racism and hellborn evil as the radical Right.

That's where Mark swings and misses by a mile.

Part of Mark's justification for his move toward the Left is that liberals are, in the end, just fine and swell people.  They're nice, kind, caring, witty, compassionate, loving.  Oh sure, they have their rough edges.  Sometimes, for reasons not quite clear, they embrace bad things like abortion rights.  But on the whole, they're good to the core.  Not like non-repentant conservatives who aren't really Christians and who are rotten and evil to the core.

This is a major rationale for Mark's current ministry.  This is how he explains assuming the best interpretations of what American liberalism has to offer while assuming the worst of conservatives.  This is how he assumes that liberals would never do anything like use the poor or the immigrant as human shields for their agendas, while he knows full well conservatives do nothing else but use the unborn as human shields.

This is a major confession of faith for Mark.  But it's obviously wrong.  It's so wrong that it boggles the mind.  You just can't get more wrong than that.  It's so wrong that Mark himself once mocked the notion.  When the Tuscon shooting happened, Mark openly mocked the liberal media narrative that somehow conservatives,  being conservatives, were simply a bunch of brainless murdering zombies waiting for someone to drop the Queen of Diamonds so they could go on killing sprees.  Mark rightly saw that this notion, that righteousness and sin are based on what color state people live in, is not just heretical from a Christian viewpoint, but idiotic.

So this very thing Mark once called out as stupid at best, is now his justification for running to the left of center.  The problem is, it requires either a deliberate misrepresentation of the truth, or a dangerously ignorant level of denial. Take, for instance, this statement from his post:

I have never encountered a single abortion apologist–not one–who speaks with glee over the death of an aborted child.

Sorry, but I posted on this growing trend in 2012.  It has only grown since.  The idea to bring abortion out of the shadows and into the light, with pride and glee and encouragement, has  been one of the most frightful developments in the long, sad history of abortion in America. And it is spilling over into the proud and open push for assisted suicide, euthanasia, and even questioning the justification of violence in the name of shutting down free speech for those who don't conform.  There are connections there not difficult to miss.

As for the fact that they don't say the word 'baby', or believe it is a baby?  Who the hell cares?   Slave owners were convinced that Africans weren't real people, worthy of the same rights as actual (Read: White) people.  The Nazis were absolutely convinced that Jews and other minorities didn't warrant being called truly human.  That people bent on slaughter will use euphemism rather than the truth to justify evil (something Mark used to point out, BTW), is irrelevant.  The fact that the growing 'proud to have abortions' movement might avoid the term Baby because they've convinced themselves there is no human in the womb is not a damn bit different than the fact that Nazis, in their minds, weren't sending real human beings to their deaths.

If Mark lived in Nazi Germany in the 40s, would he excuse the Nazis just because they had convinced themselves Jews weren't really people?  I have a feeling not. When a Catholic apologist, speaking in the name of Catholic teaching, must embrace such flawed justifications for his political positions, red flags must be waved.

As I already said, I've long ceased to listen to Mark.  All his credibility left the building long ago.  I comment on him because friends still like pestering me by sending links to his blog by email or Facebook.   I would no more care to read his blog than I would visit some radical atheist or anti-Catholic blog.  But this is dangerous.  The post looks like a contrite 'I need to love these wretched sinners' confession.  But it is wrong.  Demonstrably wrong.  Dangerously wrong.  So wrong that it risks being complicit in the move to broaden the very Culture of Death that the New Prolife Christian movement claims to oppose.  And it rests its downplaying of the manifold sins of liberalism on stupidity and falsehood.  Stupidity and falsehoods that Mark, ironically, taught me to notice in suspect arguments all those years ago.
Posted by David Griffey at 11:00 AM