The Riddle of Steel 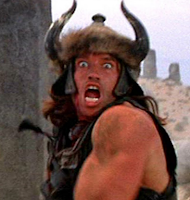 Is kicked around by John C. Wright.  There has been a sudden flurry of Conan talk on the old blogosphere.  John Wright has been going through some of the stories, and Donald McClarey recently posted on Conan's creator, Robert E. Howard.

I, for one, have never been a big fantasy fan.  I like The Lord of the Rings despite the fact that it's fantasy, not because.  I appreciate the love and passion that Tolkien emptied into his work.  You almost think you can get Tolkien if you knew nothing other than LoTR.

Narnia, esp. Wardrobe, was never the same.  It was clear allegory.  I got that even as a kid when I first heard of the book.  It took me about three minutes to figure out the connection to the Gospel narrative.  So I don't consider it fantasy, just a useful tool for a bigger point.

Harry Potter ultimately left me under impressed.  Even checking my basic lack of interest in fantasy at the door, I tend to agree with my boys' assessment.  When Rowling kept the story simple and based on her experiences of lost love, loneliness and that longing for loved ones gone, there was a charm and a brightness in her books.  But as she tried to leap up to the level of grand epic, she made, what my boys say, is a universe too big for her talents to fill.

I've read others over the years, including White and Burroughs and Lovecraft.  I've tried to get interested in fantasy or sci-fi, I just can't.  Unfortunately, my wife remains our resident sci-fi expert.  My problem is that most such stories become nothing other than history or current events with aliens and spaceships.  That's certainly true once they make it to film.  I can sit down and watch some Star Trek or Deep Space Nine episode and see nothing other than a run of the mill TV drama, just with the trappings of space fiction.  Why need spaceships and monsters when I can read history or current events?

Nonetheless, I'm aware of the Conan stories.  Like most without much care for the genre, I know of Conan from Milius's movie, which always struck me as a wonderful film despite itself.  It's principle actors were struggling with basic English, or had never acted, and were carrying a significant Hollywood production on their shoulders. 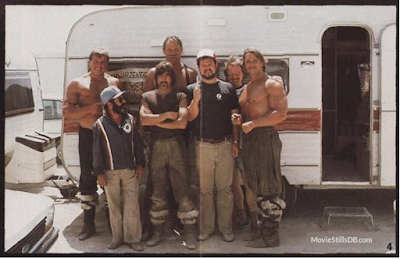 Despite it all, good directing, a compelling story, a capable cast of supporting actors, and wonderful cinematography help keep the movie on a higher plane than it should have been.  And that's not counting the almost legendary musical score that some consider one of the best in motion picture history.

The 'riddle of steel' that everyone is chatting about is from the movie.  I wouldn't presume to suggest what the real riddle is all about.  To me, it was that people are made stronger than the things they are able to make themselves.  But that's just me.  I pretend to have no expertise in the matter.  My mind is too meat and potatoes for delving deeply into such things.

I am, however, beginning to read the actual stories, owing in part to the sudden flurry of references.  We'll see.  I decided not to go in order, but to pick random ones.  They might not be high literature, but I will say they're a fun romp.
Posted by David Griffey at 2:00 PM