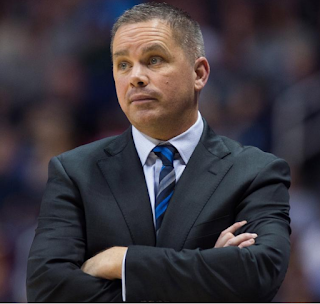 Purdue.  Ranked #3 in college basketball.  The last time Purdue lost at home was in 2016.  Ohio State was in a rebuilding year.  Coach Thad Matta was forced to leave suddenly after a crumbling record and legitimate health problems.  A beloved coach, nobody begrudged the problems that simply were overwhelming him.

All Buckeye fans hoped for was a few years to let new coach Chris Holtmann turn the program around and get it back on its feet.  Brought in at the last minute, in summertime, barely enough time to get his luggage unpacked, we figured that was as much as we could give him.

And then?  Magic.  Ohio State continues to - win.  Except against Penn State in one of the most freakish buzzer beaters of all time (OSU made the winning basket with only a couple seconds left, only to have Penn State make a desperation shot that sank the net and won with 0.00 on the clock), OSU has won one game after another.  Already entrance into the playoffs is assured.

Then there was last night.  Against the Purdue gauntlet, everyone assumed that OSU would lose.  Our main hope was that they would put in a good showing.  For most of the game, that was a hope that looked to be fleeting.  Purdue just wouldn't miss 3 point shots.  We had foul trouble.  Our one key 3 point shooter was suspended.  At one point we were behind by almost 10 points.

Once again, however, by the end of the game, it was a neck and neck race to the finish.  OSU stayed behind and played catch up.  We would get close, but Purdue would score.  One foul after another.  And all of this at Purdue in front of one of the loudest crowd's I've heard.

Yet when it was over, we had won.  At the last second we made the rebound, pushed ahead by a point, and held Purdue to a last second desperation pass and a valiant, but ultimately failed, final shot to regain the lead.

Of course Holtmann gives the team and former coach Matta full credit.  Sports tends to bring out the mature adult in people.  And the team itself plays with about as much teamwork as I've seen in years.  Plus they don't break.  They don't lose their cool.  Even being a dozen points behind with minutes left, they seem to stay calm and collected.  And I don't think I've seen a coach with such an end game approach as Holtmann.

Whatever he does, he does it right.  True, it's Matta's team, and Thad deserves credit for the talent.  But it was his team and it was foundering.  Now it's the top team in the Big Ten, and some are beginning to wonder just how far they'll make it during March Madness. Not bad for a coach dropped into a crumbling program at the eleventh hour.

Oh, and I'm glad my son got me to buy a couple tickets for the upcoming OSU v Iowa game.  It seemed a brush off just to go to an OSU basketball game this year.  I have a feeling we'll be among thousands more fans than we thought.
Posted by David Griffey at 7:42 AM