Sorry President Trump, but no 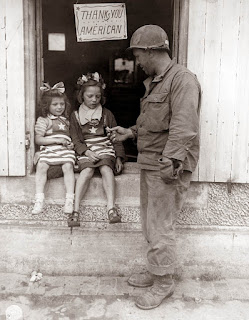 Like torture, there are some things that are supposed to be done by 'them', not 'us.'  It's not surprising that we are losing this notion in our country.  Today's conservatives being yesterday's liberals, it's not hard to imagine that some of those things that set America apart will quickly disappear.

Growing up, we didn't torture.  Oh, I'm sure we did.  Somewhere in some back room some government official tortured someone.  We had Andersonville.  Wounded Knee.  Nor were we always angels in other places and times.  But the ethic, the common decency we claimed, was that we didn't torture.  It wasn't part of our policies, our way of life.  It wasn't something we made a standard operating procedure.  It was something 'they' did, the bad guys, the Nazis, Vietcong, Soviets.  Heck, the American Indians.

That's why, in WWII, Germans fled west to fall into British and American hands, rather than those of the Soviets.  It's why British historian John Keegan wrote so complementary of his experience as a young child in England first encountering American soldiers.  One thing that set the Americans apart, he recollected, was that they seemed to have everything that nobody else had, but they also seemed to love sharing it.  See an American GI walk in, and kids ran to him because there was a good chance he would hand out what he had: gum, chocolate, other trinkets and treats. Even though those treats were meant for him, the GIs became known for giving them away, especially to the children in the areas they entered.  That was not, incidentally, the reputation held by Germans, Japanese, Soviets, Vietnamese and other warriors over the last century.

What post-moderns have forgotten, and the Left is to blame for wanting them to, is that at its worst, America was no different than any other culture or nation or kingdom or empire in history.  In an era when, from Native and Central Americans, to African empires, to Ottoman sultans, to Asian kingdoms, people still went out and took what they want from others, by force if need be, the worst that can be said is that Americans did it too.

At a time when slavery was ubiquitous, and an industry far older than the oldest profession, and universal across the seas of time, Americans owned slaves, too.  What made Western Europe and America the freakish exception is that we finally decided to banish the entire practice outright.  Never in history had it been done in such a way so completely.

America is filled with people, and as such, will have bad things and do bad things.  Sometimes, like the interment of Japanese citizens, it is especially horrible only when compared to America's lofty ideals.  Compared to those who fell into the hands of the Japanese Empire or Nazi Germany or the Soviet Gulags, those who went into American internment camps came nowhere close to the terrors of which other nations were capable.

But that doesn't matter.  We are a nation of the highest ideals, and such failures cannot be overlooked, excused, or dismissed.  Whether the Trail of Tears or Jim Crow, America wears these failures and sins like a ribbon of repentance, because of the highest ideals to which we strive.  The Left's fault is that it has worked tirelessly to convince people that no other nations or societies ever did the evils that America did, while almost any other nation or civilization was, in fact, superior to ours.  At the same time, on the other hand, it insists that America alone should be held to the impossible standard of near perfection, or deserve to be condemned far more than any other nation in history.

Nonetheless, I stick to the idea that America will only survive if we keep our standards high.  If some, like those on the Left, abuse that, hopefully up and coming generations will be smart enough to see the problem.  But hold those standards we must, which is why when so much of our media culture and political culture in the 90s worked to convince Americans that we needed to move into a post-character and post-morals era, the result could only be a cancer in the soul of our country.

Maybe I'm being picky, but that is why I'm against this.  I know it isn't as if we've never had them before.  But optics and all, times being what they are.   Like torture, growing up I learned that Americans don't do military parades.  Nazis did.  The Soviets did.  North Korea and China do.  When we did, like Teddy Roosevelt's little naval tour of the world to flex American muscles, it was setting us up for bad days ahead.  So we don't do that, or at least shouldn't.  Because we have a different understanding of our nation.  We don't need to military to keep us in line. We need it to protect us from those who have military parades.  We lead by example, not by show.

The Left seeks to burn to ashes everything upon which America was built, everything that made us a beacon to the world.  The danger will be that in the vacuum created, we will replace it with the same egregious philosophies that have doomed so many societies before us.  Whether the Right or Left, Trump or Obama or another president, it doesn't matter.

Each time we take a step away from what set America apart, we come that much closer to being what made other countries the enemies of all we represent.   Which would be a travesty.  Because the world can't afford to lose a country whose military develops as its main reputation the handing out of  candy to war weary children, whether it realizes it or not.  If the Left, which is primarily responsible for helping us forget America's greatness, happens to think the parade is wrong.  Oh well, broken clocks and right twice a day as they say.
Posted by David Griffey at 8:01 AM

Email ThisBlogThis!Share to TwitterShare to FacebookShare to Pinterest
Labels: Musings, Politics, The Decline and Fall of the American Dream, Uneducating America