Here is the actual document in question.

Sorry, I'm not buying it. Not that Texas Right for Life doesn't do those things, or say the Bishops are wrong for supporting this or that legislation, or disagree on what this or that legislation will be, or that it doesn't run afoul of the Church's current baby steps approach to handling the issue that used to be the great crisis of our age.  I'm just not buying it.

Why?  Because every time I see some pro-immigration, pro-gun control, anti-death penalty or pro-government healthcare rally come by, I notice Catholics and Catholic leaders fall over themselves to be right in the mix, joining hands, singing songs, walking in solidarity.  Even if there are forces behind such things that openly and proudly advocate for the wholesale elimination of entire generations for the sole promise of unlimited orgasmic delights in the age of 35 million AIDS deaths. Even if they pander to and promote forces that push blasphemy, heresy, and the sins that cry out to heaven for vengeance.  Even if they openly flip the bird to the Church and anyone who dares fail to conform, promising a land in which their liberal values are mandated and anyone who doesn't fall into line will be fired, fined or tossed in jail.

It matters not. Be it a murderous, brutal Communist dictator or proud advocate for exterminating people with Down Syndrome by abortion, we're continually told that the Church meets people where they are when they are right, even if they be wrong a thousand times over in other ways.  But Dave, they might advocate for the seven deadly sins, but they are right about socialized medicine, and that's what matters!

Except, apparently, when people are wrong in such a way as to challenge the Left.  Then it's off to the cornfield you go.  We can't be hanging with people who aren't straight on the up and up!  As the Church becomes more and more the willing thrall of the emergent Left, it's almost embarrassing to watch the excuses and insults to our intelligence that suggest we can't see what is really going on. 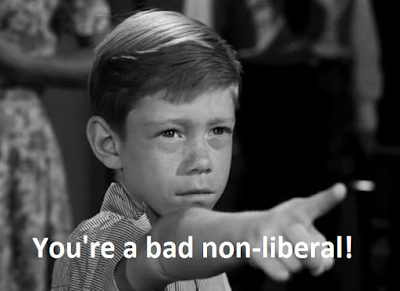 Now I could be wrong here, and unfair.  This might be the beginning of a Church getting its act together and this is the first of many steps in cutting ties with those movements, agencies, advocacy groups, organizations and individuals that fall short of the best.  Perhaps there will be a movement to suggest Catholics avoid marching with various outlets that promote a laundry list of sins and evils in the name of hedonism and narcissism, even if they are right about immigration or government healthcare.  If so, I'll gladly and joyfully concede the point and admit my hasty judgement.

If not, my judgement stands and shame on the Church for once again staring straight at the obvious lessons from history and turning away to go in the opposite direction.
Posted by David Griffey at 1:04 PM

Email ThisBlogThis!Share to TwitterShare to FacebookShare to Pinterest
Labels: a Church in need of Viagra, Catholic Church and the Left