By now, most media outlets are following the 'This was Graham, however he had scandals, but nice point at the end' model of reporting.  The scandal involving the Nixon tapes that heard him say what everyone has said, and that most Jewish friends I have admit, that Jewish influence is high in the media, has been the most common.

That's an odd one, and one of the strange models of communication in our PC world.  That is, Group A can say X about itself, but if Group B agrees with X, Group B is evil.  So not just my Jewish friends, but a special on TCM, and a series on PBS, also spoke of the high influence of Jewish Americans in media, Hollywood and television.  In fact, the PBS special even pointed out that Jewish television contributors like Woody Allen, Mel Brooks and Larry Gelbart enjoyed using their craft to poke holes in America's Christian based society.  That was PBS!  Not to mention even media outlets themselves, such as famously the Boston Globe, noticed the disproportionate influence that Jewish individuals had in a published piece of Hollywood big shots back during the Screen Writers strike.   But, Graham was Group B, so scandal.

Oh, and one more thing.  I heard at least two media outlets say that Graham preached to 'sold out stadiums'.  That suggests Graham charged admissions for his crusades.  Obviously he didn't.  They were free.  Young people not knowing the difference could conclude the wrong thing by such sloppy reporting.  These, among other things, is why the press is often a bad place to go for learning about real people.

Nonetheless, Graydanus mentions Graham's flaws, though not specifically, which is fair.  Graham himself would be the last one to declare perfection.  It was never in his own notion of perfection, but in his unwavering faith in God's grace through Christ, that Graham found his courage.  Graydanus also mentions the fact that Graham, in addition to reaching out to those outside of his own circle, was an early advocate for desegregation and Civil Rights.   That, so far, has not been mentioned in any of the television stories, though some print stories have mentioned it.  Some Civil Rights leaders, apparently, downplay that because Graham didn't advocate as much as they would have liked.  Nonetheless, Graham did his part, and perhaps the world would be a better place if we focused on the good rather than dismiss people because they didn't do good enough.

Fact is, Graham was a pastor for an America long past.  It was a time where Christianity was still the default, go-to religious foundation.  It was a time where the Protestant work ethic, though diminishing, was still present in the work place.  It was when we still learned the Golden Rule in school, and more than that, who gave it to us.  Like anything that was as much cultural as religious, Graham was a product of his time.

But he was the right product.  He was a man of conviction in a nation increasingly throwing conviction, along with values, truth, manners, respect, and unity out the window.  He was a man who learned his lessons, and admitted the unthinkable today - that he was a sinner.  He was a man who managed to be all things to all men that by all means he might save some.

And for this youngster in college, awash in MTV, cable comedy, post-Christianity, and a growing rampant modernity calling us away from our biblical foundations, he was the right thing at the right time. 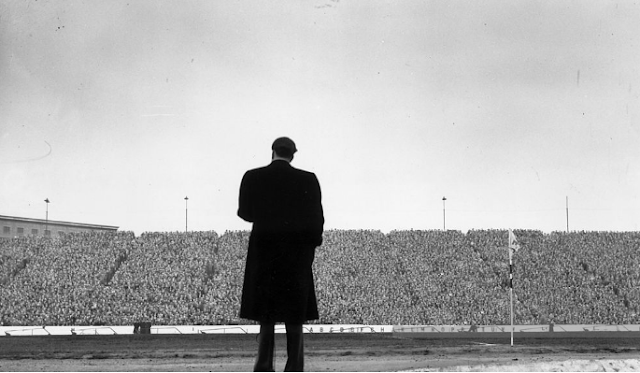 "Someday you will read or hear that Billy Graham is dead.  Don't believe a word of it.  I shall be more alive than I am now.  I will just have changed my address.  I will have gone into the presence of God."  Billy Graham.   Amen.
Posted by David Griffey at 8:00 AM