Don't use victims of school shootings to cover the hate spewed today by Gun Control activists.   And let's not pretend that it's gun owners who are the violent, murderous ones spouting the hateful, pro-death rhetoric at anyone they disagree with.  I'm not saying no gun owners do such things.  That would be laughable.  But as Victor Hanson points out, lobbing 'wish they were dead' speak at those other types is something that the biggest critics of the gun lobby have become rather good at. 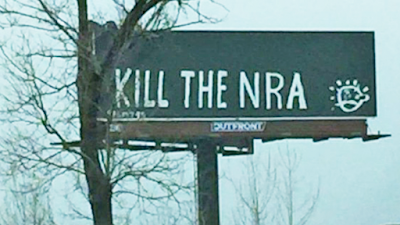 Or as seen on this site, as well as the comments:

Note the first comment: we have met the enemy, and it is them.  Followed by 'don't forget they have white skin, so that means racist!'  Gun owners apparently being white by nature.

Perhaps - and this is just me being crazy - but perhaps the reason we've had shootings over the last few decades has been the growing divisions in our nation that says there is one group, the good guys, and the other group, the evil stupid types who need taken out.  I wonder what it would be like to be a kid growing up, listening to adults frame everything that way.  Sometimes I think we're seeing what it is like.

The cynical conspiracy theorist in me thinks that it might be deliberate.  It might be that we train our society to hate and kill, and then swing in and move to end freedom and liberty in the wake of a nation taught to be filled with hatred and narcissism.  But I'll stay calm and assume it's really just a glaring blind spot.  A blind spot that is so large because we just can't bear the thought that this society we've spent decades building might not be good for your health.

By the way, as a side note, is there not one of the student activists who think the solution is other than gun control?

Posted by David Griffey at 6:47 AM