The fact is, most gun owners, and not a few non gun owners, don't trust the modern Left.  We just don't.  We've spent the last few decades drinking beer, watching the game, hanging with the family, going to our tractor pulls and NASCAR races, and we've observed.  Some of us went to school.  A few even made it past undergrad.  And we've noticed a few trends.

1.  The Left has no moral compass.  The Left thinks nothing of mocking a truth, declaring it inviolable later, and then dismissing it next week when convenient.  At any given time it reserves the right to attack anyone not on board, even if the same is only following what the Left said was true yesterday.  The only common denominator is that whatever is proclaimed true at the moment serves the designs and machinations of the political Left.

2. The modern Left is almost choke-inducing hypocritical.  Most of how the Left acts is the very way it condemned years ago.  If you want to know what the Left once called evil when I was growing up, watch what it does today.  Judging, condemning, seeking to legislate morality, imposing values on others, criticizing religion, calling for boycotts, demanding conversion to its superior morals, and seeking to ban offensive expressions - these were all what the Left once associated with Fascism and the 20th century dictatorships.  Today, they define almost every aspect of the Left's behavior.

3. The Left has absolutely no accountability.  The Left can be forgiven for doing what most human endeavors have through the years, and that's seek to control others and acquire power and wealth and worship of the little people.  Nonetheless, historically the good news was that when such movements arose, there have always been the poets and dreamers, the artists and authors, the journalists and intellectuals to stop them.  Today, no matter how appallingly stupid, arrogant, intolerant, judgmental, or downright evil the Left becomes, there are, at best, crickets from those same bastions of freedom of thought.  Sometimes, those bastions of protection have become the willing mouthpiece for the same things they once fought so hard to prevent.

4. We can't help but notice that Obama's eight years were among the worst in American history, especially where freedom and liberty are concerned.  If there were times when different Americans weren't free, we've seldom seen a time when freedoms were walked backwards at such a pace.  Not since the Red Scare has a sitting national leader worked so hard to curtail freedom, whether freedom of speech, conscience, religion, or the First Amendment as a whole.  And instead of being appalled, too many to Left of center cheered.  In fact, the same Left calling to end the 2nd Amendment happens to be the same Left that has encouraged a generation to rise up and call free speech 'Hate Speech.'  Smart people notice things like this.

In short, the Left hasn't given thinking people a damn reason in the universe to believe that the intentions of the Left are anything other than dubious at best.  From teaching young people to hate America's heritage and traditions, to attacking the Christian faith upon which so many Western values were founded, to subtly weaning them into a generation calling to end freedom of speech, the rule of law, due process, presumption of innocence, or anything that stands in the way of their promised narcissism, too many see gun control as simply another notch in the gun aimed squarely at the heart of the one civilization that brought democracy, liberty and the idea of life's sanctity to the world to begin with. 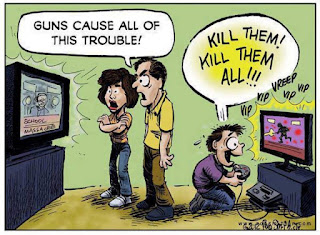 And that's simply not something we're willing to jeopardize.  Nobody wants mass killings.  Nobody wants to send their kids out the door wondering what crazy is out there ready to kill just to kill.  We all know that the reasons we have such a problem are due to many factors.   Guns might - might, mind you - be one of a hundred factors, not even counting the obvious spiritual and religious truths Christians long ago stopped believing to be uniquely beneficial for the world.

Unfortunately the Left, and its accomplices across the nation's institutions that are supposed to protect us from tyranny, aren't the least bit interested in any of the other reasons.  So overwhelming is their dismissal of any other factor that one is hard pressed to believe that the Left gives a rip at all about stopping the next mass shooting.  In fact, each day it becomes easier to believe that the Left cares for curbing gun violence as much as it does women, minorities, the poor or others when those others no longer serve the greater Leftist agenda.

I'm sure most liberals, young and old, are of good faith and wish with all their hearts to do something.  I sometimes think that is the hook with which the Left snags so many.  It's in human nature to want to solve problems, and the Left, in following that deeply embedded debt to Karl Marx, promises a simplistic solution.  In this case, letting government add one more layer of laws that might or might not make a difference, but anyone opposing the plan is clearly the bad guy (aka, the bourgeoisie).

It would be good for those youngsters and liberals to take a nice, long look at the Left with which they have aligned.  The fact that the press made a big deal out of kids calling for gun control falls hard on the ears of those who have listened to the same generation call free speech 'hate speech', and the same press give limp rebuttals at best.  We have listened to a growing number of youngsters elevating their politics above all things, bringing their hatred of their political opponents to their sporting events, activities and campuses.  We have watched those same youngsters demand an end to anything they find offensive, through any means possible.

If those same kids would rally, not for gun control, but for the truth needed to help the problem no matter where it leads, then we would be inclined to listen.  Otherwise, we're simply not going to listen because too many who support freedom and liberty see this as a freedom issue, not a gun issue.  They see the rise of mass killings and mass shootings as the logical extension of the culture we've built.  They believe that looking across the landscape of the America we have spent half a century making, and saying guns are the problem, is like looking at the world in 1944 and concluding air pollution is the crisis of the day.

They understand that even if a gun law could do something to minimize the risk in the short term, if it comes at the expense of our liberties and the Christian and Enlightenment based society upon which we are built, that the long term casualties will be far greater than a hundred mass shootings. And they realize that the forces behind the kids, or the adults, screaming 'Gun Control Only!" are the same ones most threatening the very society that gave us care about the individual in the first place.   Not just for ourselves at the moment, but for our posterity, do we take such a position.
Posted by David Griffey at 8:00 AM

Email ThisBlogThis!Share to TwitterShare to FacebookShare to Pinterest
Labels: Defending Liberty, Gun Control, The Tyranny of the Left