Why the Left should be feared 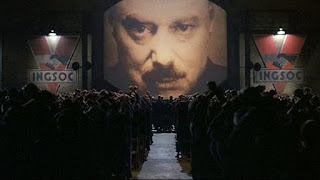 Here.  An opinion piece from last year by a distinguished Berkeley professor about why hate speech is not protected speech.  Of course you could see the glaring problem with that as far away as Neptune.

Hate speech is like hate crimes.  In fact, opposition to the concept of hate crimes was largely predicated on the fear that such abstract things as 'hate speech' could arise and seek the same legal backing.  Problem is, what constitutes 'hate' in general has become stunningly subjective.

I remember back in the late 90s, when the whole 'hate crimes legislation' movement was gaining steam, there was a shooting in a Texas church.  The witnesses agreed that the shooter walked in and yelled expletives at them for their religion, and then opened fire.  His motive?  What little coverage it got after a week left it at 'authorities are still unsure as to a motive.'  Make it a Black church or a synagogue or mosque and bet me how long it would be for at least the press, if not the authorities, to kick around a motive.

That's the problem with hate crimes.  It is largely based on whatever latest demographic is in the news as a victim demographic.  When it comes to that wacky world of linguistics, it's even tougher.  After all, words change in the best of times.  Sometimes things that are acceptable now are deemed wrong tomorrow, or at least different (think of the word 'gay').  Nowadays words can be wrong, right and wrong again in the same day.  In fact, the list of 'trigger' words seems to be growing day by day with no end in sight.

Do we really want to say 'hate speech' is not protected in such a climate?  What if I told the good professor I consider some things said about white people or Christians or Americans to be hate speech?  Would he support grouping those in the category of 'not protected'?

Saying 'hate speech' isn't protected is one small step toward an Orwellian nightmare.  The only thing worse would be to pass laws making us speak a certain way.

Besides that, there is only one of two ways to go with this.  Because anything can potentially be seen as offensive or hateful by anyone, we will end up with no speech at all being allowed.  Or, more likely, we will begin to determine just who matters and who doesn't matter when it comes to offending them. And once we go down that path, we're heading backwards toward ghettos, cotton fields and gulags.

Either way, the dangers, threats and problems with this new 'ban more speech' movement should be plain to any and all.

But second, while you have a few big name righties, most are confined to hovels behind barbed wire fences in the back hills of Montana.  The radical left?  See this article for what that entails.  Saying it's time to end free speech as we know it, largely centered around speech the good professor and others don't like, is being advocated in our schools, our colleges, politely debated in our news casts and among journalists, and even increasingly advocated by such ironic outlets as the entertainment industry and politicians.

The very venues that work so hard to protect us from one extreme are increasingly becoming complicit in aiding the other.  Hence my focus on that other threat that is finding favor among the powerful and influential who should be the ones guarding our freedoms.
Posted by David Griffey at 8:00 AM

Email ThisBlogThis!Share to TwitterShare to FacebookShare to Pinterest
Labels: Defending Liberty, End of Liberty, The Tyranny of the Left