That Toys R Us filed bankruptcy and is closing all of its US stores made quite the splash.  We'll miss it - to a point.  Given our own financial issues, it's been a long time since the family and I shopped in the house of Geoffery.  Nonetheless, there has been much debate about the role that Amazon played, and the role that bad management and marketing decisions played.

What hasn't been discussed, however, is this little snippet from a TRU representative.


The decrease of birthrates in countries where we operate could negatively affect our business. Most of our end-customers are newborns and children and, as a result, our revenue are dependent on the birthrates in countries where we operate. In recent years, many countries’ birthrates have dropped or stagnated as their population ages, and education and income levels increase. A continued and significant decline in the number of newborns and children in these countries could have a material adverse effect on our operating results.

Interesting.  I'm sure that isn't the only, or even the main, reason TRU collapsed.  Nonetheless, there is something about that suggesting a lack of smarts.  Give money to an industry that spends much of its time eliminating your clientele.

This makes me think on the lingering suicide of the West.  The question has long ceased to be "If Europe ceases to exist", but "When Europe ceases to exist."  And it's not so much the evils of immigration as much as unfettered immigration mixed with unsustainable birthrates.  Were it not for immigration, European countries (and possibly the United States) would already have proven themselves generationally insolvent. 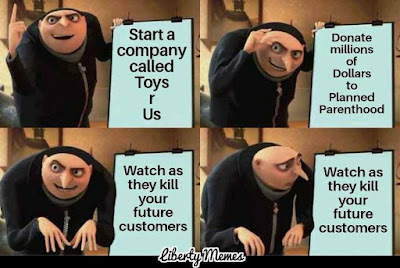 Of course the multi-cultural Left doesn't' mind.  Since it sees the West in mostly evil terms, and every other culture and civilization through the rosiest glasses, the end of Europe and America might be a good thing for humanity.  Pope Francis, who often sounds suspiciously like a Latin American Liberation theologian, also echoed that view when he praised the ascension of Islamic leaders in Europe, rather than lament the possibility that the civilization that brought the world concepts of human dignity, freedom, liberty, equality, the scientific revolution, and Democracy might be dying before the rest of the world is prepared to pick up the flag and run with it.

Nonetheless, there's reason to believe the Christian West wasn't all bad, and in fact brought a positive contribution to the world, one that won't easily be replaced with its elimination.  Those Christians, especially Catholics, who have developed a rather Protestant view of the West's history might also have something to answer for down the road.  Losing toy stores is just small potatoes next to what might end up being the result of the West's diminished role in the world.
Posted by David Griffey at 10:00 AM

Email ThisBlogThis!Share to TwitterShare to FacebookShare to Pinterest
Labels: Culture of Death, Decline of the Christian West