The Seven Samurai and a Parkland shooting reflection 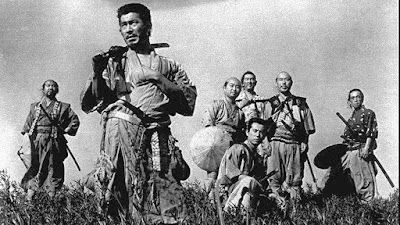 I finally did it.  My entire life, I've heard of the almost mythical movie Seven Samurai.  Considered one of the greatest foreign language films by American critics and universally praised by critics around the world, I just never got around to watching it.  When I did look for it, it was difficult to find.  And when you could find it, it was always expensive.

Finally, this last Christmas, Seven Samurai ended up under the tree.  Because of its length of 3 1/2 hours, we couldn't find time to see it.  Since the two oldest have moved on with college, they're not around to watch things like they used to, but they wanted to watch it with us for the first time.  So it wasn't until Tuesday night that we could get everyone together for the first viewing.

It was worth the wait.  Long and short, it lived up to the hype and then some.  Everyone knows of its influence.  We all know The Magnificent Seven was just an American version of the film.  We know that from Guns of Navarone to A Bug's Life, the movie has been considered one of the most influential and copied movies of all time.

Despite this high expectation, and I can't put my finger on why, it lived up to all I had heard and more.  I think, when the dust settles, it was the interaction between the players.  Oddly, in the end (without giving away too much), the seven Samurai do little of the fighting, instead funneling the fight over to the village farmers and letting them do most of the heavy lifting.  The movie is mostly about the relationships between the villagers and the Samurai, and the Samurai (technically mostly Ronin) and each other. 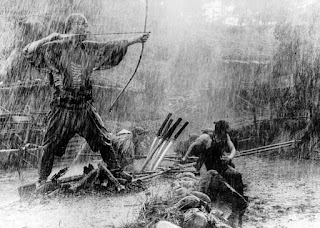 But here's what dawned on me.  In America, there is this notion that only in America, and all because of that infamous 'Code' of the 1930s, our films were repressed and unable to express themselves openly.  We have this notion that the sex and drugs culture, with explicit and open and unrestrained sexuality and hedonism, accompanied by increasingly gory and bloody violence shown graphically in film and on television, were all just the logical result of the 'Code' finally crumbling and true artistic expression emerging.

Furthermore, we are now just getting back to how it always was, when sex and sex and graphic sex and gore and graphic violence were just the way it should have been or always was or both.  Without saying it directly, we have this notion that we're finally getting things back to the rest of the world, where gay sex, group sex, graphic violence, drugs and all the explicit 'invite the camera in the bedroom' movies were common around the world.

Except, it wasn't.  Seven Samurai, a movie where hired guns come in to save a village from rampaging bandits, is violent.  There are dozens of deaths.  And yet, you never really see much.  No blood.  No gore.  No guts hanging out.  You see a few fights at the end.  You see some duels.  But no explicit violence.  You see a case where a village girl and a young Samurai get together in a barn, much to the father's dismay.  Later, the head Samurai chuckles that they'll expect more from the youngster now that he has 'become a man.'  We all know what that means, just as I'm sure audiences did back then.  But they didn't show it.  And all that restraint without the evil Hollywood Code, driven by the nefarious Catholic Church.

And that got me to thinking, as I am wont to do.  The fact is, there was no real 'Hollywood Code', at least any different than anywhere else in the world.  Oh, there was a code.  And it had its demands and its expectations from films, just like today.  If you think on it, there isn't a lack of movies coming out of Hollywood that question homosexual normality, or challenge abortion rights, or reflect on the failures of the Civil Rights movement over the last quarter of a century, because there is nobody out there imagining these things.  They simply aren't allowed.  If they were made, they would be boycotted, banned, attacked and even sued.  Codes have always been around.  I'm sure they always will be.

And not just in America.  Being a fan of old, silent movies, I've seen my share from around the world before there was this mythical Hollywood Code. Heck, a few predate Hollywood.  Sometimes you get a little more than you would in 1930s or 1940s Hollywood fare.  Sometimes you might catch a bit of skin in some old, silent Italian film, or see some more direct examples of innocents dying in an old Soviet propaganda film.  If there was any nudity at all, it came off as more artsy than anything sexual, and that's stretching it since I don't recall anything, but I'm willing to allow for the possibility.  Yes, you could get a little more nitty-gritty at times, like the original King Kong, but like 1954's The Seven Samurai, there just isn't a case of flagrant, porn like sex and graphic blood and gore violence that I have found.  There just isn't.  Anywhere.  Around the world. 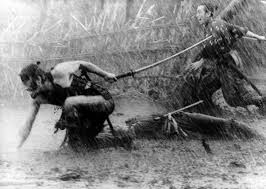 This is something that has arisen only over the last fifty years or so of film making and other visual entertainment.  Sure, the 'themes' were there.  Samurai was about the real, down in the trenches lives of these legendary warriors as much as it was anything.  It was taking the chivalrous knight down a notch, by showing warts and all.  But it didn't show it with the camera.  It showed it with the dialogue and the mind of the viewers.

Somewhere, however, filmmakers in America, Europe and around the world began showing us, rather than pointing our minds to think it through.  By the fifties, violence was starting to creep into the explicit levels.  By the sixties, sex was getting more open as violence became more graphic.  No longer did a mixture of camera angles and convenient barricades mixed with clever dialogue point the audience to what happened.  Nope.  By the late sixties, the cameras were going into the bedroom or showing the gunshots and saying 'here you go, this is what happened.'

And it was right around that time, if memory serves, that the mass killings began, at least as we  know them today.  And not just here in the old US of A.  Of course movies and entertainment around the world have become pretty graphic - including in Japan.  And it seems that mass killings are quite the global phenomenon.  Oh, not the shootings like we have.  But mass knifings, mass bombings, basically attempts to kill as many innocent people you might or might not know as possible.

Could it be connected?  Based on the film record, there simply was no culture at the dawn of the film industry that threw all manner of graphic sex, violence, gore and smut out there for public consumption.  Even outside of the Hollywood 'Code', there seemed to be pretty strict codes around the world.  But all of that changed by the mid to late 20th century. 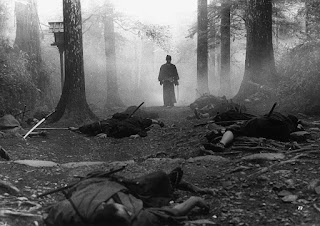 Could there be a connection with this relatively new phenomenon of people seeking to slaughter as many innocents as possible for no other reason than to slaughter them, and the rather graphic level that entertainment has risen to?  We already elevate celebrity and entertainment to the place that religion and national identity enjoyed in ages past.  Could there be a connection?

It turns out that this whole 'Code' thing wasn't reserved for America, just like this phenomenon of mass killing of innocents isn't confined to America. Because the breakdown of barriers in cultural output, and the rise of mass killings through terrorism and personal crime seem linked in the timeline, could there be a connection worth examining?

Just curious and sort of thinking out loud after watching one fine romp of a film.
Posted by David Griffey at 7:43 AM