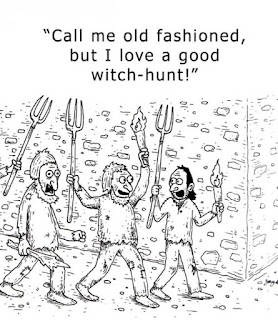 We all know about witch hunts.  That's where endless hordes of hapless innocents were slaughtered by sadistic and merciless Christian hypocrites throughout the ages.  Every day, in every town, people were no doubt being burned, hanged and brought to the dunking stool.

That little exaggeration isn't meant to make light of what did happen.  People were executed for witchcraft, and often for no other reason than trumped up charges based on hysteria and paranoia.  Even if one innocent person dies, it's one too many.  But the exaggeration is to remind us of the impact that inflamed rhetoric has on the mental framework of a given age.  Exaggeration of events went a long way toward enabling the witch hunts.  And that sort of tendency isn't confined to old Medievals who weren't as smart as us.  That exaggerated take on the witch trials, after all, is pretty much assumed truth in many corners of American and European Society.  And that level of exaggeration and overstating the case to paint people (even fellow Americans) in the worst light is more than common today.  Exaggerating, overstating the case, happens then and now.

The result back then?  That's where witch hunts came from. If you live in an age where from top to bottom you're told people will slink off to the Harz Mountains and indulge in Satanic Sabbats for the purpose of gaining power to maim and kill and steal the souls of innocents, you're going to have witch hunts by people who logically want to end the problem before it gets out of hand.

And today?  Well, when you're told that all around the country are endless hordes of murdering, genocidal, racist, gun and Bible toting Right Wingers just itching to lynch them some black people, kill a few Jews or Muslims, or torture some LGBTQ folks, then it shouldn't be surprising that, especially in the minds of youngsters who have grown up with the narrative, they see these enemies in every corner, behind every tree, or even on every college campus.  Thus a Dominican priest is not only mistaken for a Klan member by students who are clearly as schooled in religious practice as one would expect from a generation of seekers, but the students sound the alarms and want action taken immediately!  It's what they expect.

C. S. Lewis said that we don't burn witches at the stake anymore because we no longer believe in witches.  Well, wrong.  We're raising a whole new generation of believers in witches.  It's just that the witches they fear, and increasingly want eradicated, simply go by a different name.  I'll leave you to guess what name it is.  As to when we'll start burning these witches?  That remains to be seen. Right now imprisonment, censorship and financial retribution appear to suffice.
Posted by David Griffey at 8:09 AM

Email ThisBlogThis!Share to TwitterShare to FacebookShare to Pinterest
Labels: Our Post-American Nation, Stupid is as Stupid is