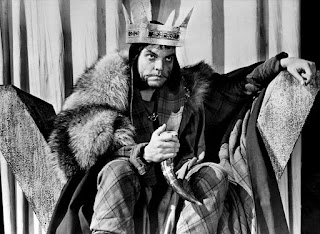 Today is the day to celebrate the worthy Bard.  Owning to some obligations around soccer and church, we didn't have the chance to give the day the time it deserves.  But we will finish watching Orson Welles' strangely interpreted Macbeth.  We started it the other day, but didn't have a chance to finish.  It's one of those Shakespearean takes that reminds us about artistic license when it comes to interpreting Shakespeare.  It's different.

There are others.  We're partial to the BBC's Hollow Crown series ourselves.  Though Kenneth Branagh's Henry V is arguably the best version of that play, even against a wonderful performance by Tom Hiddleston on the Hollow Crown series.

Among others we enjoy is Olivier's Hamlet, despite the absence of Rosencrantz and Guildenstern.  Speaking of which, we also enjoy the film version of Tom Stoppard's Rosencrantz and Guildenstern Are Dead.  Starring Tim Roth, Gary Oldman and Richard Dreyfuss, it's a great way to spend an evening.  In the humor category, another family favorite is the 1978 American Conservatory Theater's production of The Taming of the Shrew.  It's knee slapping hilarious at times, and gives several winks and nods to some of the seedier innuendos that one can find in the Bard's works.

Of course Shakespeare is also a good read, and we've done our fair share with the family over the years.  Including using homeschool as a good excuse to get the boys to act out their own favorite parts of the plays.  Not that such performances always go well, as the rehearsal here more than demonstrates.  Nonetheless, we have our moments.
Posted by David Griffey at 8:10 PM