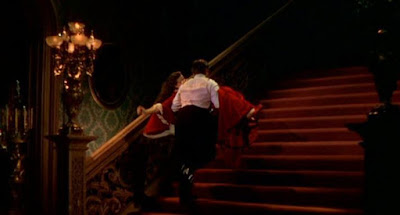 Over at John C. Wright's site, there is a good piece noticing what is so true: The Left is quickly becoming worse than all of the things it once condemned.  I'm going by memory here.  I think it was feminists who turned the tide of 'no crime, just victims of unjust, corrupt societies' that dominated our approach to criminal justice for several decades after WWII up until the 1980s. Feminists gave us that when it came to murder and mugging and burglary and other crimes, you had to blame society and be open and friendly and think of the criminal first.  Or the victim of the unjust, corrupt society.

But when it came to rape, forget it.  Rape and sexual assault were to be condemned, punished and shown no mercy.  Any of the slightest references to men imposing themselves sexually was nothing short of rape and to be condemned.  I remember a Phil Donahue show, back in the mid-80s, when the famous scene in Gone With the Wind was shown in which Rhett Butler grabs Scarlett and takes her up the darkened stairs.  The point was, Scarlett wasn't going to have sex with Rhett and Rhett said no way.  The feminists on Donahue's show made it clear we were to spew condemnation on that scene and on that movie because of such a vile display.  Of course today Gone With the Wind will likely be condemned for other reasons.  That's the Left for you.  There's no end to what it wants to condemn.  But then,it was because rape was no laughing matter.


I caught this when it was one CSPAN.  There were other parts just as telling.  The sheer hypocrisy and contempt that the two representing the liberal view displayed.  Desperately trying to hold onto classic Leftist anti-Western narratives in the face of ISIS and the immigration debacle, they more than once retreated to that modern Leftist tendency to rewrite yesterday's truth in order to win the latest debate.

But it was shocking when the stories of gang rape and sexual assault were met with accusations that those bringing them up were the ones obsessed with sex.  And done so to rousing laughter no less. Kudos for Mark Steyn and Nigel Farage for calling them out.  For reminding them, who accused Steyn and Farage of being 'obsessed with sex', that according to those feminists and liberals of old, rape had nothing to do with sex.  BTW, that was an attempt by liberalism to distance the ugly results of its sex and drugs cultures from the facts.  The idea that the more sexed up we were, the more sexual assault and rape seemed to be on the rise.  Liberals dealt with that by appealing to Academia and Science and demanding a new definition, which the 'experts' gladly produced.   Rape, it turned out, had nothing to do with sex.

But in this case, the hypocrisy was too much, and Steyn loses it.  I was glad to hear at least some applause when he said rape shouldn't be laughed at.  And it's worth noting that the liberal panel did seem a bit squeamish about the whole topic once it went in that direction.  But it's not unique.  The Left's ability to discard standards, truths, morals and anything to win the latest argument is the biggest weapon in its arsenal.  If you thought rape was always bad, had nothing to do with sex, or should never be laughed at simply because that's what the Left said, then you had to know that soon you would be outside the fold.  And not just this once.  It turns out that hoping for rape and assault, like so many things on the Left, will swing from being horrific to being the hope and dream in order to lay claim to today's latest awesomeness.  Killing, rape, oppression, imprisonment, why the list goes on an on!  There's just no telling what the Left will declare to be the best thing ever by the time tomorrow rolls around.  Given the track record of the last ten years, I'd say the sky is the limit.
Posted by David Griffey at 8:18 AM

Email ThisBlogThis!Share to TwitterShare to FacebookShare to Pinterest
Labels: Progressivism, The Leftist Juggernaut