Twitter is where Catholics go to dance with the Devil

Really.  So Dave Armstrong and Scott Eric Alt got into a spat.  I'll leave them to it.  But that made me look for more of Alt's take on Armstrong.  Exactly why Alt felt the need to unload on Armstrong is beyond me.  It could be that Armstrong, a passionate and supporter of Pope Francis, still isn't properly leftist enough.  For most on the Left, being 99.9% leftist is as good as being 100% white MAGA conservative racist Nazi deplorable after all.  But who knows.

In any event, I did a Lenny and Squiggy's bathroom moment, held my nose, screamed, and went over to Alt's Twitter feed, which also had shares from other New Prolife Catholics.  I'll get to some of the other fantastically bad, ignorant, and downright apologetics for evil I found from others.  This is what leapt out at me on Alt's Twitter (again, I'll leave his clash with Armstrong to others to care about): 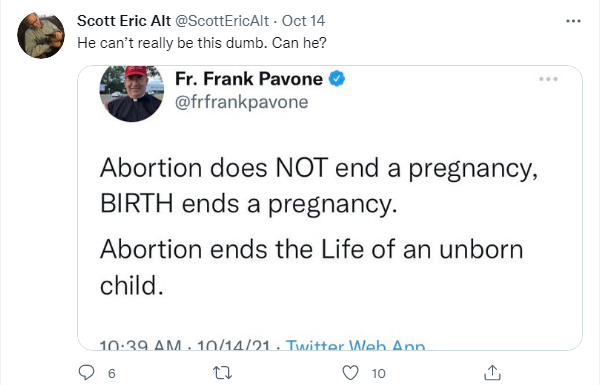 Wait.  What?  Please tell me just how Fr. Pavone is wrong.  I get that he's playing on words and I'm not sure emphasizing that abortion is killing a baby delivers much punch today. After all, the big pro-abortion tactic nowadays is to be pro-abortion, and not just pro-choice.  Admit it's killing a baby, boast in the fact, and rejoice in the fact that the divine vaginal does give you power over life or death, or those sexist men ain't getting any tonight (which appears to keep most men in their place where saving babies is concerned, ahem).

But how is Fr. Pavone wrong?  I read that, read it again, read it a third time, and finally read it once more, and I can't see how he's wrong to the point of dumb.  So please dear readers, comment below and tell me what I'm missing. It might be so obvious I'm missing it.  Perhaps my deep suspicions about anything Alt writes is blinding me to the obvious.  But I would dearly like to know

Email ThisBlogThis!Share to TwitterShare to FacebookShare to Pinterest
Labels: Catholic Church and the Left, Catholics and the Internet, New Prolife Movement