Liars and the Left

I'm sorry, but I'm throwing a Five Rotten Eggs Stink rating on this story.  It's an NBC story (right there a warning flag), in which a teacher in Texas claims to have been told to balance a book about the Holocaust with an 'opposing view.'  Of course, all because of that horrible anti-CRT legislation going on.

Now, I read the article, and it unpacks a somewhat rambling set of interviews and accounts that is clearly meant to suggest anything hindering the liberal agendas in our schools could lead to insisting any book that says raping children is bad will have to be balanced by 'opposing views.'  Which as sane people, we know to be false.

In fairness, the article does interview proponents of the anti-liberal indoctrination legislation who make it clear such gibberish is just that, gibberish.  But in classic journalism form, you have to delve into the mid-section of the article to find the substance and the pertinent information from those who actually oppose CRT and other leftwing indoctrination moves in our schools.

The bookends of the article, however, are filled with 'we'll have to teach the Holocaust is good, and that's going to make wonderful teachers quite and we're all going to die!' hysterics.  Which, combined with the headline, is all NBC cares about.  After all, NBC knows the vast majority will read either the headline only, or the first couple paragraphs at best, with a few more reading the last couple paragraphs.

Again, it's the press's famous 'how to be honestly false' trick.  It's meant to gin up hysteria and panic and divisions.  And it taps into those people - in this case teachers - who are willing to shovel endless BS and lunacy, if not lies, for the cause.  The cause being turning our schools into leftwing indoctrination camps that bar and ban any opposing views.  And that's not hysterics.  That's a fact. And it's a fact demonstrated by the slick and duplicitous ways in which CRT and other measures are being supported and advanced by educators and the press.

UPDATE: As if on cue, Deacon Greydanus jumps in with the requisite hysterics that our precious children will be forced to learn the Holocaust was good! 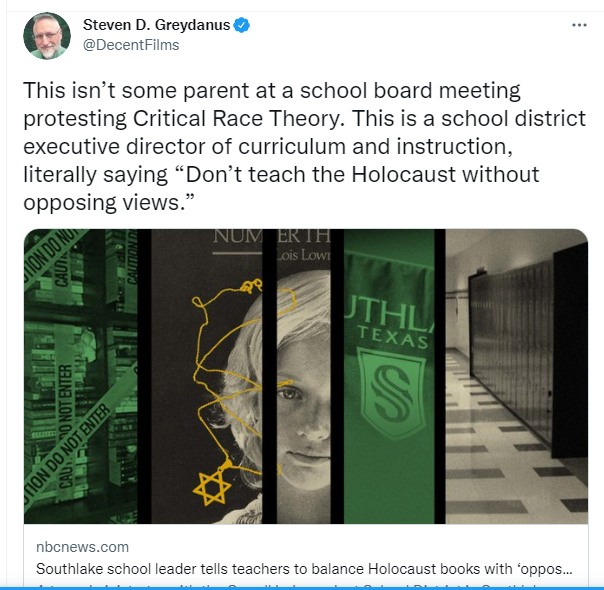 This is actually a copy from Mark Brumley's FB page, which seemed to join in the panic.  Several commenters jumped in and wailed in great mourning over this development where our wonderful teachers will be forced to teach the glories of the Holocaust.

This is how it happens.  This is the power of the narrative the press wields.  Any sane, thinking person knows that nobody is going to demand the Holocaust be given equal time and consideration.  And yet an accusation can be made, the press runs with it (again, couching the details that minimize the story in the middle of the story), and hysterics commence, even among people I wouldn't expect it from.

Note Deacon Greydanus's invocation of 'not them', in that this is a school administrator who, apparently, would never lie or exaggerate.  Or the teacher wouldn't?  Just like no woman ever lied about being assaulted during #MeToo, now we can assume no school administrator would ever embellish on the truth for partisan gain?  See the amount of rubbish, dumb and stupid needed to keep up with modern times?  And again, not just from hardcore leftwing advocates.  We all can fall into the pit. If we think our large number of diploma wielding graduates protects us from the mob insanity of past ages, we need to think again.

UPDATE II:  So I've done some digging, and as the news feeds begin to pile up with the hysterics inducing headlines, it's easier to find more information.  I discovered the administrator who sent out the message that we'll need to teach 'opposing views.'  Because of her position, she doesn't seem to be too political on Social Media one way or another.  I can't say she's some frothing at the mouth leftist, or righty.  She doesn't seem too critical of the latest educational agendas and strategies, but that's about it.  Did she send this out because she bought into the usual partisan handwringing?  I mean, I've heard those who support the 1619 Project or CRT say if you oppose those, you're as good as saying slavery was awesome and there's nothing better than the smell of genocide in the morning.  Did she merely run with that assumption?  Was she being purposeful in such a vague directive?  Did she do this to trigger the media firestorm that is commencing?  A stealth partisan perhaps?  Or was it naiveté or carelessness in wording?  Hard to say.

After all, the phrase 'opposing views' is vague, perhaps purposefully so.  For instance, if the curriculum says the Holocaust happened because Germany was a Christian country and it was a very Christian directive, there are views that say otherwise.  There are some who suggest the Holocaust had bupkis to do with Christianity, and that it was in fact driven by other ideologies and agendas.  That would be one example of 'opposing views.'

But again, we have a vague phrase with nothing to go on but the vague phrase, and the clear desire by the press to frame this as a 'your kids will have to learn that raping teddy bears is good' narrative.  And as the good Deacon Greydanus demonstrates, that's already having the desired effect.

Posted by David Griffey at 7:29 AM

Email ThisBlogThis!Share to TwitterShare to FacebookShare to Pinterest
Labels: Left and a New Communism, The media and the Left but I repeat myself, The Party of Lies