Why we homeschool in one easy image 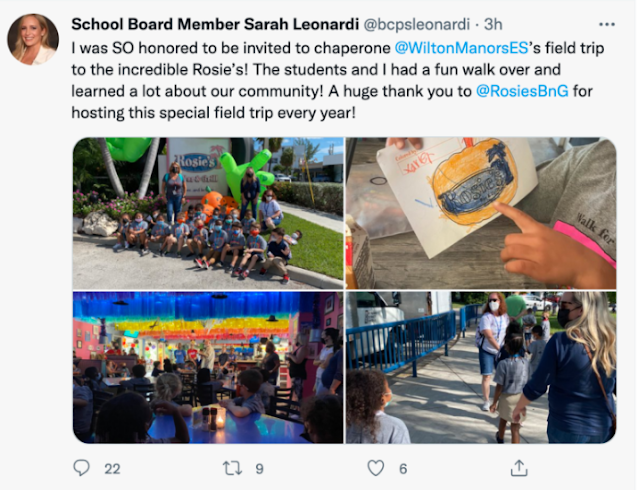 Yep.  From Broward County public schools.  Taking kids to a field trip at a local gay bar, for gay bar is what it is.

Life would be infinitely better for us if we didn't homeschool.  Since becoming Catholic, we've been jumping from one frying pan to the next, with occasional dips into the fire.  In most worlds, we wouldn't homeschool because, if for no other reason, we are hardly set up to do so financially.

Nonetheless, the above is not the exception, but simply an extreme example of the rule today.  And this doesn't count the 'hate yourself white people' race hate, the anti-Americanism, the pro-Marxism (my sons' World History textbook gave kudos to such luminaries as Marx, Lenin and Mao, as opposed to our own racist and imperialist presidents), the secular template for religion, and the various leftwing indoctrination tactics that have kept us homeschooling.

I've said before that class content wasn't why we chose to homeschool.  Even a decade ago, things weren't this bad.  But when the bureaucracy steamrolled one of our sons, in the absence of a local Catholic school or even private school, we went radical.

Back then, one of Mark Shea's most celebrated post subjects was his 'why we homeschool' threads. When I emailed him for advice on a homeschool curriculum, he posted that and the readers posted multiple suggestions in the comments section.  We settled on the Kolbe Academy, based in California, accredited, and able to bestow an actual high school diploma on the students.  It's also a classical based education curriculum.

For that post and advice at CAEI, I'm forever grateful.  It helps keep the boys grounded and able to see past the bilge, lies and ruinous values promoted by our schools - and society - today.  But such is life in a country whose faith is a godless paganism.  So whatever the cost, in the foreseeable future, it will be homeschool all the way.   It beats my son being taught to hate his skin color while being shuttled over to the nearest gay bar.

Posted by David Griffey at 9:50 AM