During the Kavanaugh hearings, we heard pundits, politicians and even some fine religious leaders remind us that it isn't a case of evidence or not, but it's about offending women who want to abort their pregnancies.  The whole 'it's not necessary to have evidence when you know someone is guilty' has been picking up pace among the American Left for some years.

Of course uncritically condemning past ages for failing to conform to the infallibility of our own sensitivities is the only way to approach historical studies nowadays. That has allowed the Left to challenge the idea that anything dreamed up in the past - including, but not limited to, ideas of democracy, freedom of speech, sanctity of life, or presumption of innocence - have to be good.  Because everyone in the past was bad, anything they came up with can be judged and dispensed with accordingly.

But what of the cases in which we're not sure? Maybe someone in the past wasn't so bad, or guilty of the sins of the age.  My friends, I give you the Leftwing.  There are no principles, values, morals, truths, facts, or any such rubbish.  They simply say things and they happen.  Because they control our nation and have for decades. 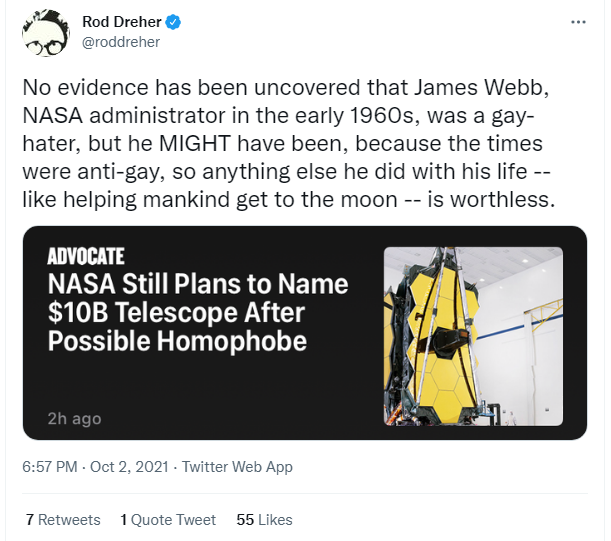 You see that?  Rod Dreher gets it.  They don't have to prove he was a person who didn't bow before the altar of gay sex.  It's enough that he lived then.  And we can condemn the entire period of time and everyone in an entire nation or demographic at any given period in time, so it's enough he was part of those.  Guilt by chronological association.  That's all we need.

Expect many "Christians" to realize just how great it is we no longer need anything but when and where someone lived to condemn and exterminate accordingly.

At least the gestapo went through the motions of a kangaroo court to eliminate someone.  The modern Left is seeing to it that no such burden will be placed on its followers.  It will be enough to say someone might be guilty just because, and then proceed to eliminate.

These are dark times we live in, and they are only going to get blacker.

Email ThisBlogThis!Share to TwitterShare to FacebookShare to Pinterest
Labels: Promoting Gays, The evil the Left does, Triumph of the Left